As I might have mentioned previously, I caved and started working on the bodies for my early 17th century outfit (1610s). I'm justifying it because it's "for work"...

I waffled for a long time over the fabric. There was some nice silk brocade from Puresilks that was close to my original inspiration image, but I have had dicey dealings with them in the past and I was impatient. :-P But Renaissance Fabrics was selling wool satin, which I've wanted forever, so I went with that. In "The Tudor Tailor", russells is described as "a luxury worsted with a satin weave." Bingo! 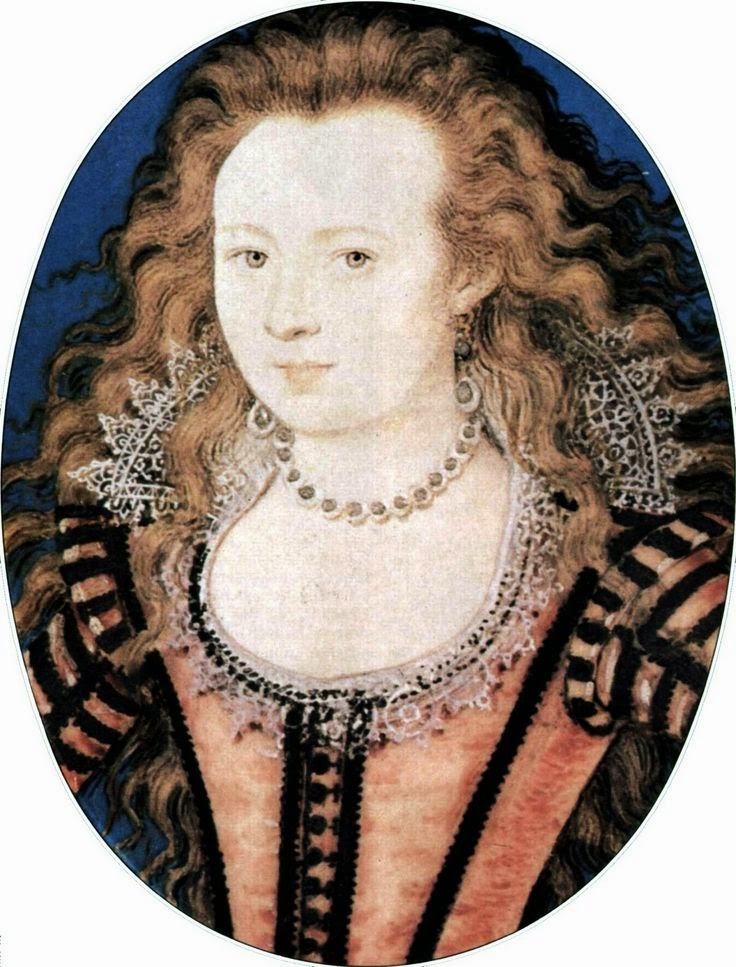 And it conveniently is similar to this miniature of Elizabeth Stuart by Hilliard!

So this is my new inspiration image. Now to buy lots of black trim, and make black thread wrapped buttons...

The Smock and Other Linens: I've bought this lace from The Tudor Tailor for my smock, band (fan-shaped collar), and cuffs. Need to get some linen, still... But the lace is the important thing, right?

The Bodies: I chose the "Elizabeth Vernon" style bodies. I'm almost finished with the boning channels! Well, sort of. I have the back and one of the two fronts done, and the second front has been started. Here's my progress so far: 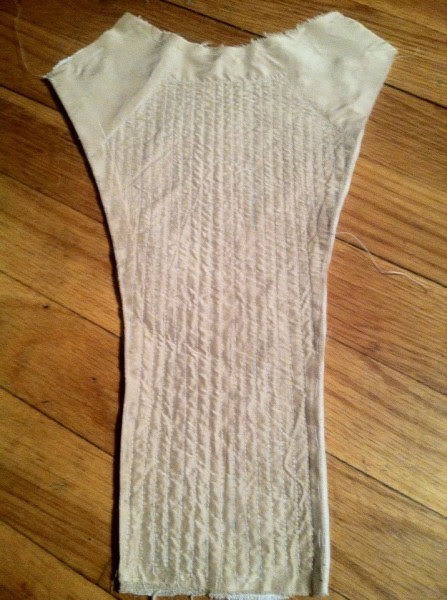 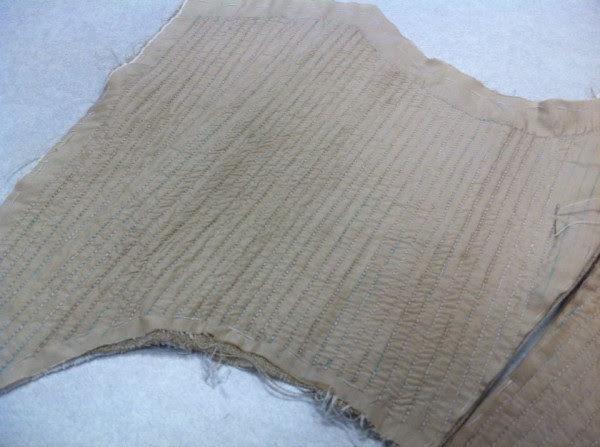 Then eyelets, whipping everything together (literally), and binding...

What I'm not yet sure about is the skirts, whether they should be closed or open. I haven't found a good fabric for a petticoat to go with the wool satin. So we'll see... But there's a fair amount of work still to be done before I get to that part.
Posted by Samantha at 6:40 PM 2 comments:

Come Out to Bacon's Castle! 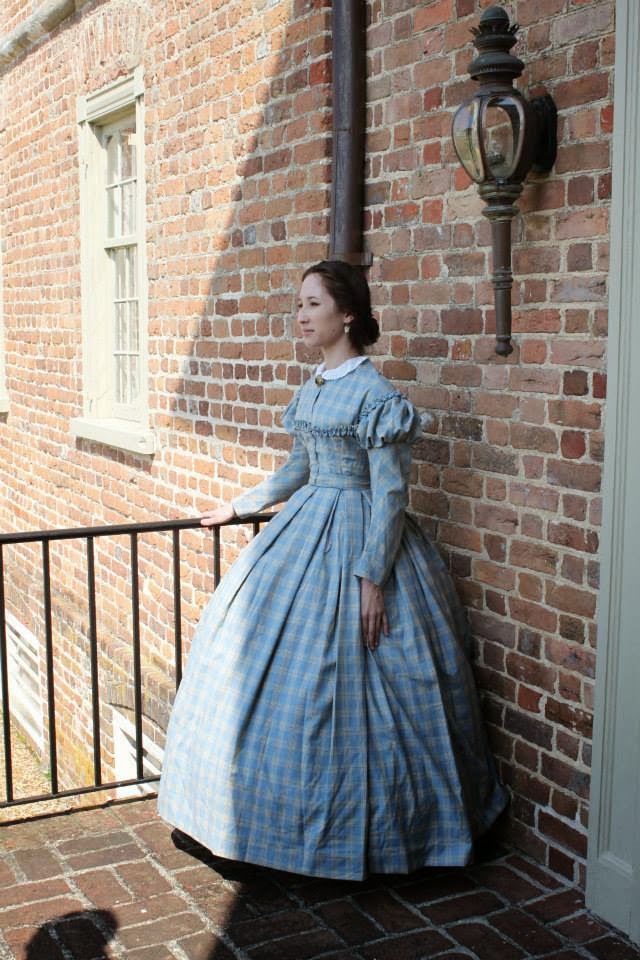 Yesterday, Mike, Nicole, and I did some filming for Bacon's Castle. It was so fun! Mike played my jilted suitor and got to ride a horse, and Nicole drove us in a 1930s truck. We'll be doing more next week, too!
I want to invite y'all to the 18th century cricket match at Bacon's Castle on May 3rd. It's a great excuse to come out in 18th century clothes at a beautiful historic site and see some handsome guys run around in breeches. ;-) And you get to go on a ferry!
Event info:
https://www.facebook.com/events/662707810463622/
Bacon's Castle:
http://preservationvirginia.org/visit/historic-properties/bacons-castle
Here's a couple pics Nicole took throughout the day. She made a stunning 1670s gown that I know you will love when she posts about it!

*squee!* Here's the pictures! Well, some of them. Like my wedding pictures, it was hard to narrow it down! I feel so grateful to Lauren for asking me to be a part of this, and for allowing me to share and use the gorgeous images she created. I also want to add that I LOVE the Stratfords and that they are very, very comfortable! Go buy a pair, now!You might recognize this gown as once being my 1560s fitted English gown. I had originally planned to wear it as-is for the shoot, but it started to bother me that the gown was technically 20+ years behind the shoes... So I altered the bodice and trim to bring it a bit more up to date. I wish wish wish I had more silk damask because I wasn't able to remake the sleeves to the nice puffy, sausage sleeves of the 80s and 90s *sigh*. Can you all forgive me? And can you forgive that awkward wrinkle on that chest that happens when I put my head down? I'm trying not to let it bother me because Lauren's pictures are so beautiful...This has really pumped me up to work on my early 17th c outfit. I won't be cutting any corners with this era. Right now that means hand sewing the channels in my bodies, and then a hand sewn smock with lace from the Tudor Tailor. After that will be a petticoat, "French farthingale"/bumroll, gown, cuffs, and rebato/collar. Yikes! But I'm excited.If I'm being completely honest, most of my Elizabethan clothes have been very costume-y, since they were made for faire, and coming from a faire background about how to do things. I had period shapes and silhouettes, but not period fabrics or construction. But recently--really within the last year or so-- my involvement with Colonial Williamsburg and my growing circle of friends who are dedicated to historical accuracy have really inspired me to do everything--everything-- as right as I can with 21st century limitations. I had been doing this with 18th century and Civil War, but not with things like my Elizabethan outfits, because that was for faire. But why should there be any difference? I know it's not for everyone, and I absolutely do not judge a single person who doesn't do things the way I do. But it's what I want to do for me. 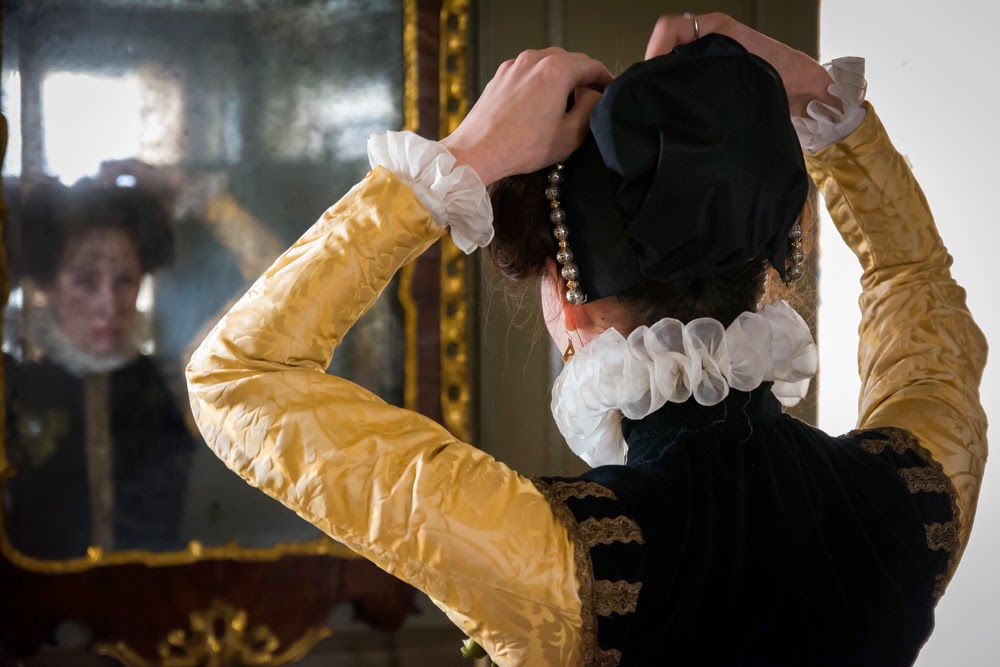 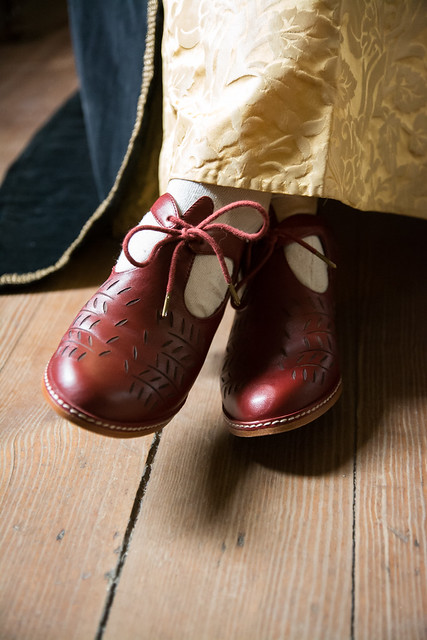 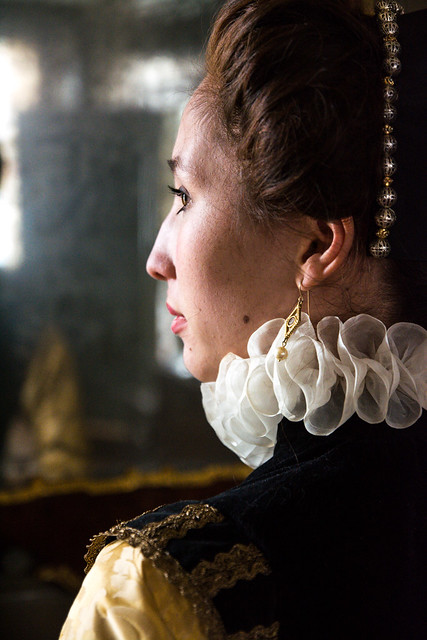 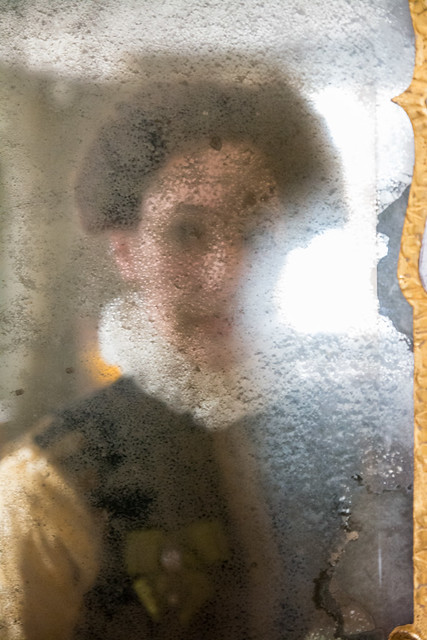 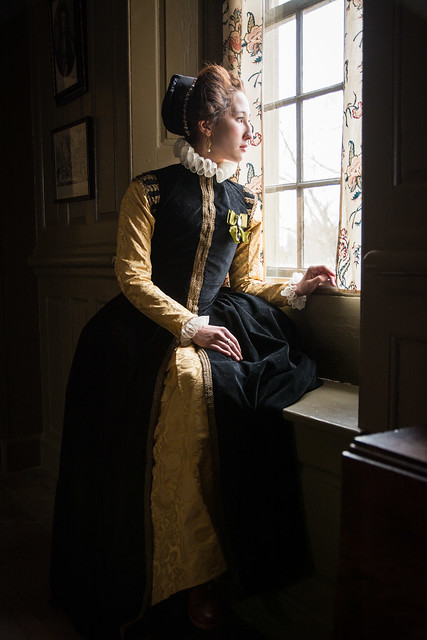 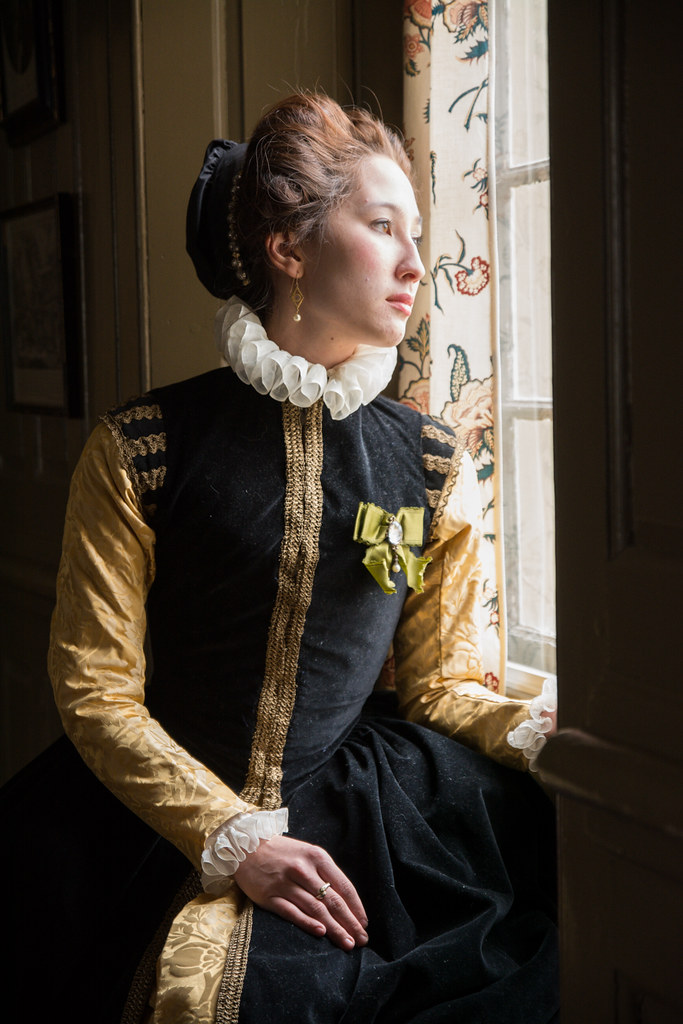 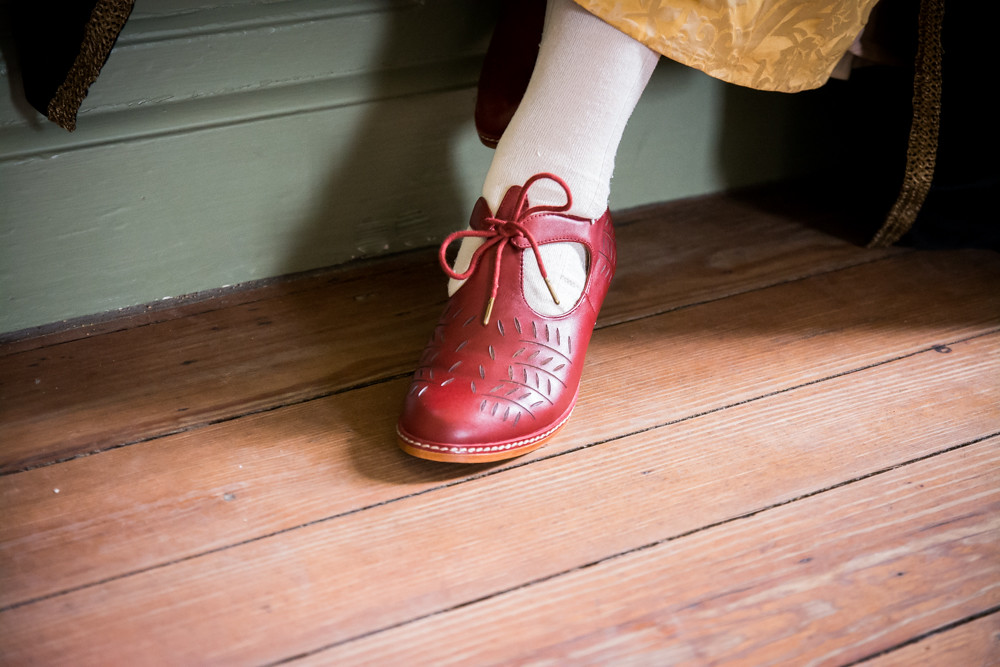 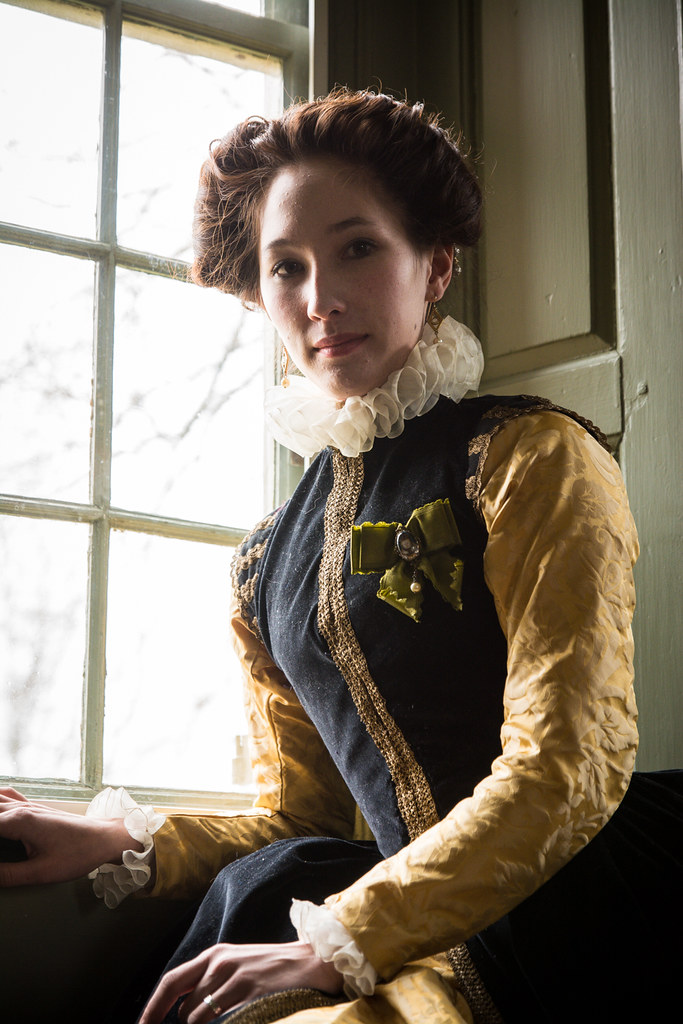 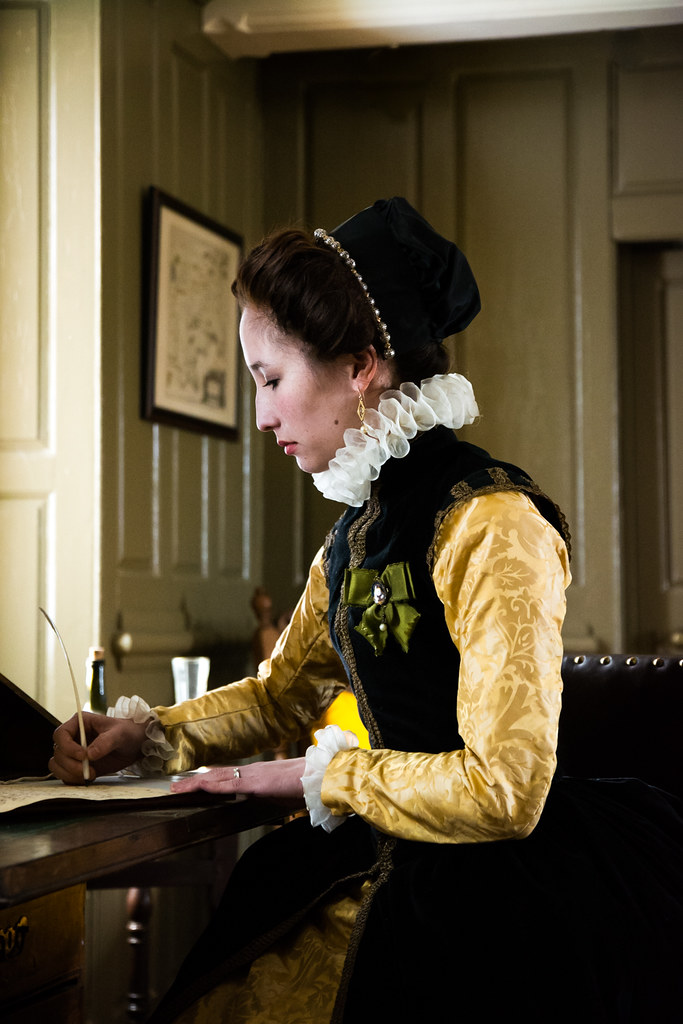 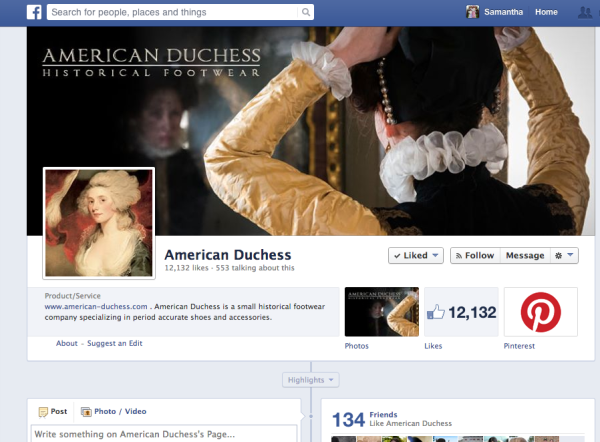 We did an AMAZING photo shoot when Lauren was out for the millinery conference, along with Maggie and Lauren M.  I can't wait to see the rest of the images! The pictures were taken at Bacon's Castle, which is a wonderful hidden gem just across the river from Colonial Williamsburg. Everyone should visit the next time they come to Williamsburg! They have really great events throughout the year. Mike and I will be doing some filming for them for their new promotional movies. And the 18th. c cricket game will be held there on May 3rd. :)I will post more about the outfit when the rest of the images come from Lauren. I did a complete overhaul of my 1560s English fitted gown to make it more appropriate for the 1580s-1600 timeframe of the Stratfords.In related news, I broke down and started making 17th c bodies. But it's okay, because it's kinda-sorta for work... ;-)
Posted by Samantha at 6:52 PM 1 comment: