A Lady of the Knights of the Blended Rose, 1778: Part 2 Construction and Thoughts 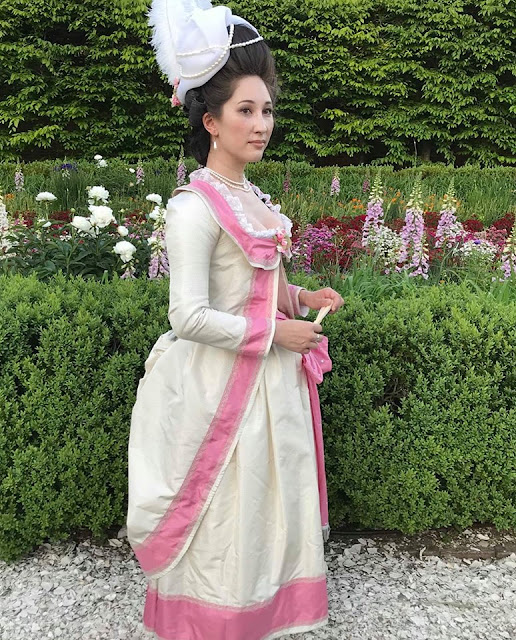 Now on to the actual making of the gown!

I started with putting the petticoat together, which is something I usually do first with most of my projects these days. Not only is it usually the easiest part of an outfit, but I've accepted (after many years of not doing this) that it really is best to do fittings on the upper body over as many of the under layers as possible, which includes all of the petticoats you will be wearing. It just saves frustration and time because you know exactly where your waist is and how the petticoats and other layers affect the way the bodice will sit at the waist.

Once the petticoat was made and trimmed in the pink silk with fine silver lace, it was time to move on to the polonaise. I have no problem admitting this style of gown intimidates me, even though I made one last year for the Museum of the American Revolution. I also took a polonaise jacket workshop from Janea Whitacre back in 2014 so I wasn't going in to this completely unprepared. And since Brooke Welborn and Kendra VanCleave published their article on the "true" polonaise, other costumers have made beautiful polonaise gowns. But I was anxious about how this style would look on me and if I would absolutely hate it after putting all that work into it.

There are a few variations within the polonaise style, so bear in mind that what I chose to do is not the only way to do things, although every choice was made based on a period example.

The back of my polonaise is cut similarly to an English gown, with a pleat on either side of the center back seam. This was done on a beautiful polonaise in the Glasgow Museums collection. 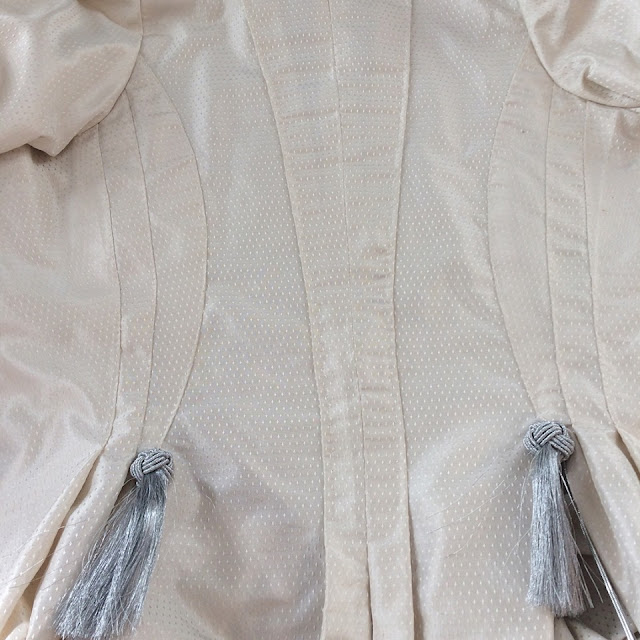 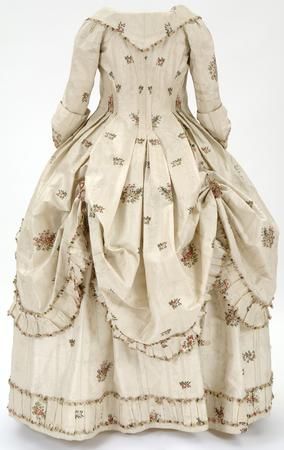 I cut the back of the polonaise first and stitched the pleats on either side of the center back seam. Then I cut the fronts of the polonaise, which flow from neckline to hem without a waistseam. There is extra fabric at the side back that is pleated to provide fullness to the skirts and draw the polonaise closer to the body, allowing the fronts to fall away from the center point. I chose to make an attached "waistcoat" or under-bodice that is stitched at the side-back seams and the arms. Other options are a completely separate waistcoat or a stomacher, but I liked that an attached waistcoat would mean fewer moving pieces and it would provide a more fitted look (again, I was really concerned about not liking how a looser gown would look on me). The waistcoat fronts are lined but the fronts of the polonaise are not. 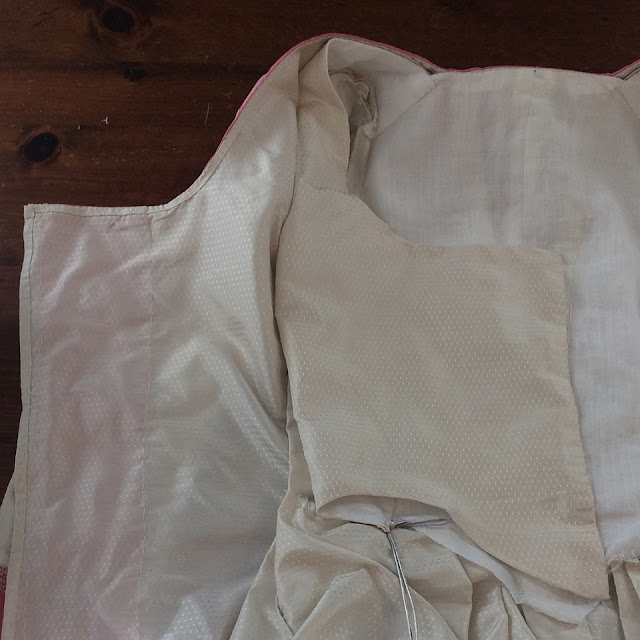 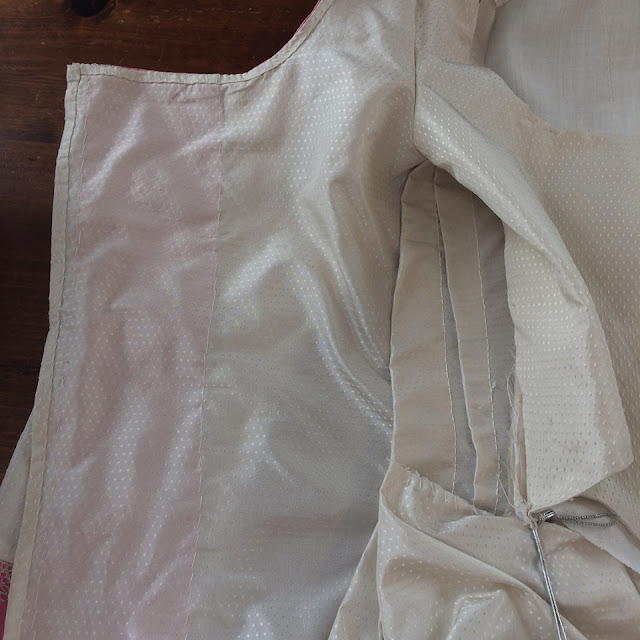 A look at the inside of the gown. Here you can see the wrong side of one of the polonaise fronts including the two pleats that run along either side back. The attached waistcoat is to the right. 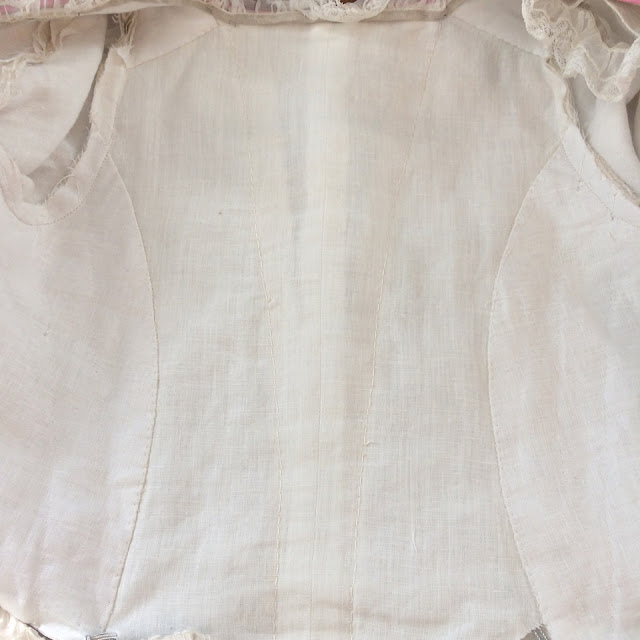 Once the waistcoat fronts are whipped in, the interior looks similar to an English gown.

Because this style of gown doesn't have robings or a separate shoulder strap, I treated the polonaise and waistcoat fronts as one and backstitched the sleeve in all the way around.

Here are a few views of the gown with the skirts left down. 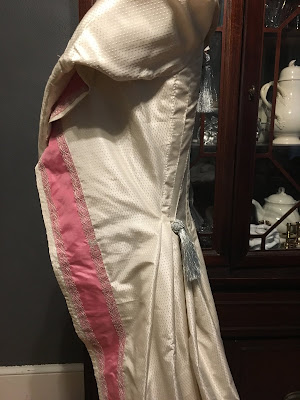 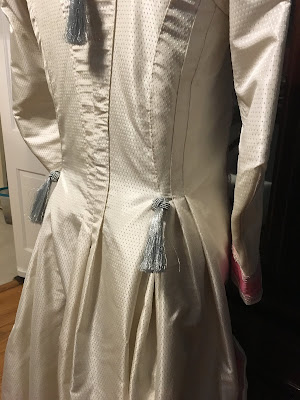 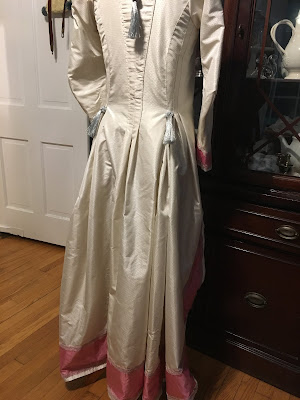 
The outfit got to make its debut at the Colonial Williamsbur Garden Party, and Eliza came dressed in her costume for the ladies of the Knights of the Burning Mountain! 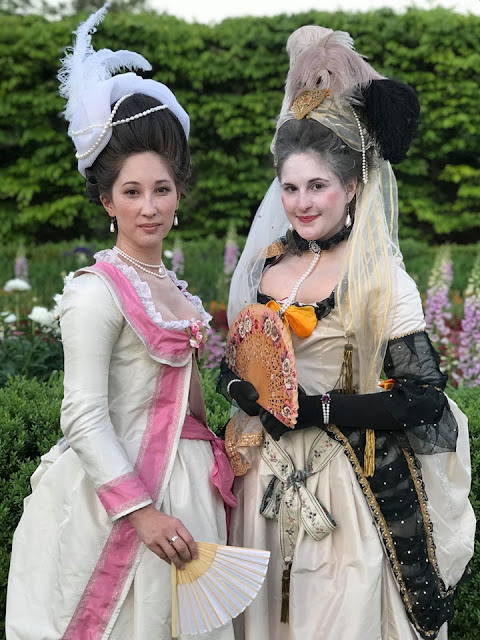 I was sewing up to the very last minute so I ran out of time to make the turban and veil the way I wanted to and in a way that would better represent what the descriptions say. I also didn't get to spangle the stockings! But I am very much looking forward to wearing this outfit again, with all of the accessories fully finished. 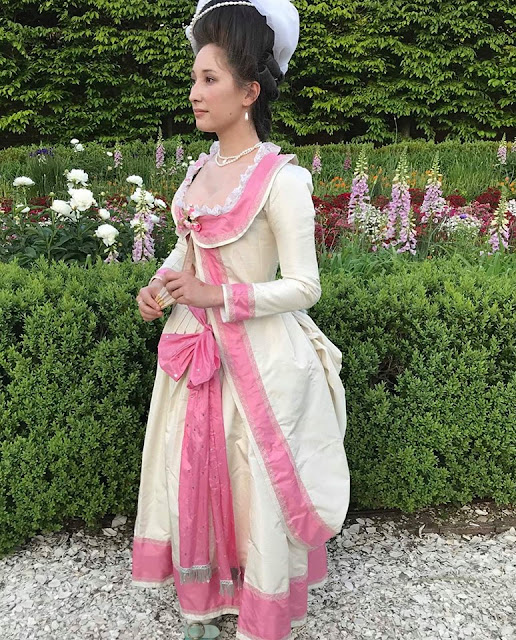 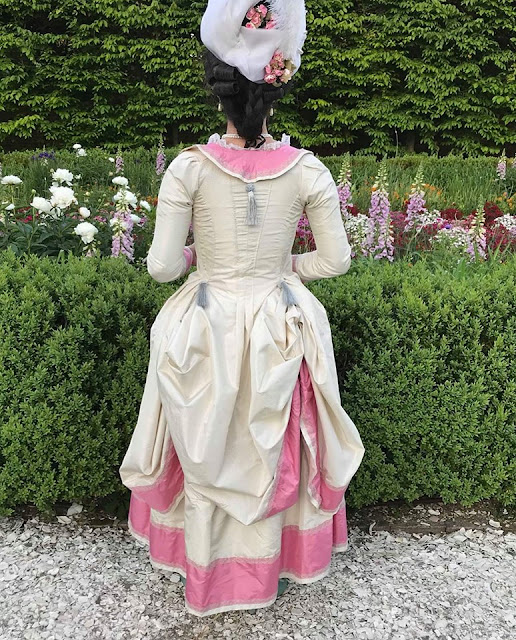 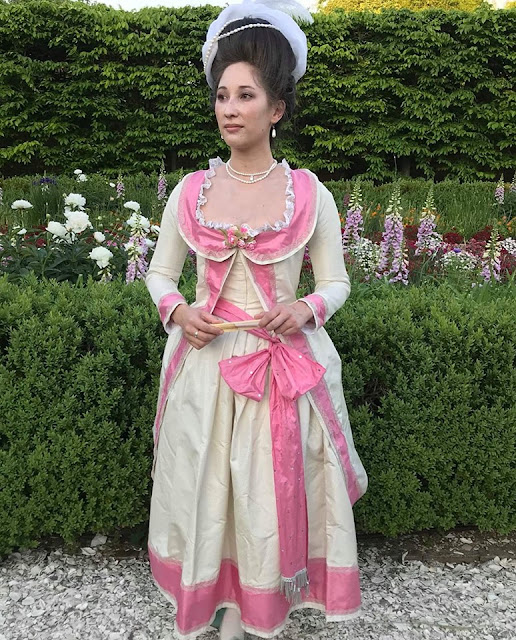 What would I change? After talking to Brooke Welborn about my polonaise and getting her advice, I'm going to put a diagonal tuck in the polonaise fronts (which will be hidden behind the trim) which will eliminate the folds you see in the front and help the fronts cut away from the center of the body a bit more. I need to re-set the bottom of the sleeves to eliminate some excess fullness. And I want to see if I can do anything to make the cape lay more nicely and not wrinkle so much. But I'm also an incurable perfectionist! I really did love wearing and making this outfit and hope to find another event to which I can wear it!

A Lady of the Knights of the Blended Rose, 1778: Part 1 Research and Design 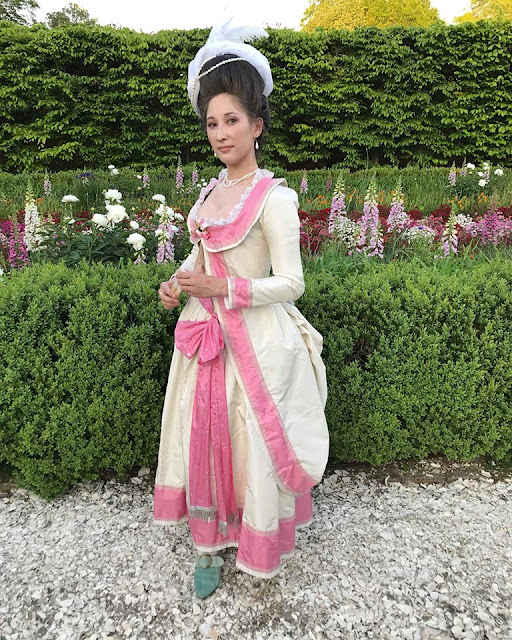 Last September I had the opportunity to portray the daughter of a prominent Philadelphia family, Peggy Chew, at the Occupied Philadelphia event organized by the Museum of the American Revolution (also in Philadelphia). It was incredibly enjoyable to explore and share the experiences of such a young woman, as her family was neither wholly Loyalist nor wholly Patriot/Rebel, but instead walked a fine line that many wealthy, established families did. It's all too easy to want to divide the participants of the American Revolution into either camp but the reality was much more ambiguous. Indeed, the event centered around the mixed feelings of Philadelphia residents and their new occupiers--or liberators, depending on who you asked.

Peggy and three of her close friends (the infamous Peggy Shippen, Rebecca Franks, and Rebecca Redman) constituted the "little society of Third and Fourth Streets", the most celebrated young ladies in Philadelphia. It was only natural that they caught the attention of the romantic and dashing Major John Andre when the British occupied the city late in 1777. Although Peggy Shippen is often suggested as Andre's main squeeze (as in the TV show "Turn"), it was Peggy Chew that Andre chose to be his "lady" for the most extravagant party of 1778.

The Meschianza was a wildly imaginative farewell party for General Howe, designed and orchestrated by the theatrical Andre himself. It was essentially Georgians reenacting their idea of the Medieval period, complete with knights and jousting. The knights belonged to one of two opposing teams: the Knights of the Blended Rose, in white and pink, and the Knights of the Burning Mountain, in black and gold. As Andre was a Knight of the Blended Rose, Peggy Chew and the other ladies were attired in their colors. (For more information about the Meschizanza, see here and here.

Because of the extravagant and unique nature of the Meschianza, considerable information about it is still available today, including descriptions and images of the costumes worn by the ladies. This was incredibly helpful for this project! I must thank Eliza of Silk and Sass for instigating this crazy undertaking, and I'm very glad she did. She has been researching and portraying Rebecca "Becky" Franks, who was a lady of the Knights of the Burning Mountain, so we would conveniently have one lady from each group.

For the ladies of the Knights of the Blended Rose, we have the following descriptions.

Andre wrote an after-action report of sorts and described the costumes this way:


They [the ladies] wore gauze turbans spangled and edged with gold or silver; on the right side a veil of the same kind hung as low as the waist, and on the left side of the Turban was enriched with pearl and tassels of gold or silver & crested with a feather. The dress was of the polonaise kind and of white silk with long sleeves; the sashes which were worn round the waist and were tied with a large bow on the left side hung very low and were trimmed, spangled, and fringed to the colors of the Knight.

A memoir by John Fanning Watson gives this description related by a fellow lady of the Knights of the Blended Rose, Miss Craig:


He [Major Andre] sketched it [the dress] to give the ladies an idea of the garb they should assume. In reality it was this:– for the Blended Rose a white silk, called a Polonaise, forming a flowing robe, and open in the front of the waist– the pink sash six inches wide, and filled with spangles– the shoes and stockings also spangled– the head-dress more towering than drawing, and filled with a profusion of pearls and jewels. The veil was spangled and edged with silver lace

There is also a sketch Andre did of the headdress of a lady of the Knights of the Blended Rose: 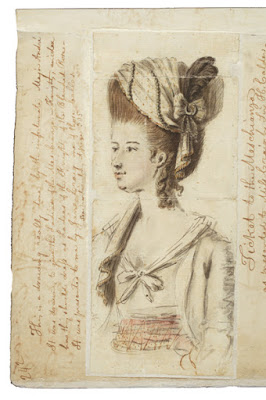 Armed with this information, I set about gathering the materials for my polonaise gown and accessories. My dear Stephanie destashed some figured ivory silk and I got the remainder of the materials from various Etsy sellers. I had just enough silver metal boullion fringe to use on the ends of my pink silk sash, which is also spangled according to the description. 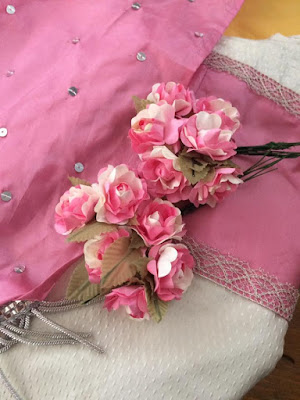 I had to use creative license for the design of the polonaise since their are no surviving images of the full outfit, but my design would still be strongly rooted in historical examples. I wanted to bring in the pink to the polonaise itself, not just in the sash, so I took inspiration from two-tone polonaise gowns that appear in French fashion plates and extant Spanish gowns. There is also an extant British polonaise in the V&A that is white with purple silk fabric trim, so I felt confident that my choice was within the realm of possibility. 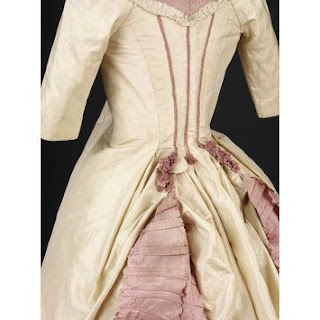 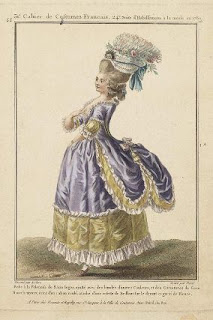 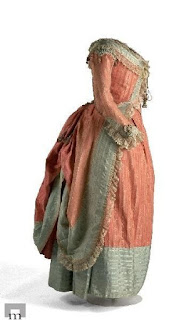 This was the little sketch I did so I could better see my design: 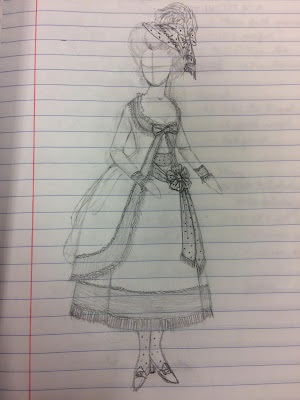 This has ended up quite a bit more involved than I expected, so I will end here and put the construction of the polonaise and accessories in a second post! Check back later!
Posted by Samantha at 11:28 PM 13 comments: