First of all, thank you to everyone who has been commenting on my latest post! I love to hear what you guys have to say, and I think everyone is raising excellent points. Keep it going!

I would like to point out something which has come up a lot in people's comments: many of you have said how difficult it is to track down the right info on an image.

This is totally true! But just think how much easier things would be if everyone had taken the initiative to properly cite sources from the beginning, instead of just pinning or putting things on Tumblr willy-nilly without links to the original museum or website it came from. All we can do now is cite things when we know the correct information, and try to correct the false information as best we can. 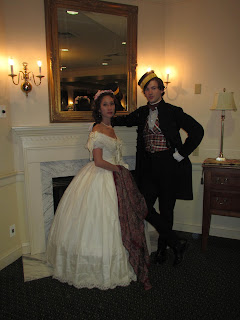 I say the following in the spirit of good research, which for me as a(n) historian is so crucial to one's credibility in the field. I don't mean to belittle or attack anyone, just to hopefully help folks when looking for inspiration for sewing projects.

I know a lot of us make historical clothing for different reasons and with different levels of accuracy in mind, so far be it from me to judge who does what. However, citing your sources correctly is imperative for everyone because it gives credit where credit is due and helps spread correct information. In our age of technology, nothing spreads faster than false information which is almost instantly accepted as truth because it's on The Interwebz. I've been victim of this myself a few times, I readily admit!

But one thing in particular is bugging me. Pinterest. A lot of things are circulating as fast as the flu on there that are either a) original garments or images with incorrect information or b) modern garments and images, whether from a movie or a modern sewer, which are said to be originals. I also have a lot of problems with Pinterest outside of historical clothing, but this subject pertains most to my blog and its readers.

I'm going to focus on part B of the above statement, with particular regards to the costumes from Italian costume house Tirelli Costumi. This company makes drop-dead gorgeous stuff! It is just stunning in its detail, and looks very close to original garments.

These are some of the main offenders. All of them are from movies and are not original garments.

So what's the problem with these costumes being mislabeled as originals clothes? Well, I like to think of it as the difference between primary and secondary sources when writing research papers. Primary sources are from the period, written, made, or otherwise created by people who lived in that particular time. They act as evidence which is then interpreted by historians who then write... secondary sources. These are historians' interpretations of history, to put it most simply. They take the rough data and give it some kind of meaning. Both sources are used in research, but they mean different things and have different weight. Primary sources are like the bloody knife found at the murder scene with the alleged murder's fingerprints allllllll over it. If you want excellent evidence to prove that the alleged murder did it, there is little better than that!

When I seek to create a period garment, I like to gather at least three "primary sources," or what I consider my bloody knives (morbid, lol). Stuff I know will back me up as being done in the period I wish to recreate. These three sources  are:

1) original garments
2) original fashion plates, paintings, or other images (taken with a grain of salt for artists' interpretations)
3) original photographs (if available--obviously not before the 1830s!)

Movie costumes are not one of these things. They are costumers' interpretations of past fashion. They are "secondary sources." They can absolutely be inspiration! But they are not the bloody knife to bring into court to convict the murderer.

So if you see a movie costume you love and want to see if you can "prove" aspects of it existed in the actual period, try to find your pieces of evidence to back it up--then go for it!!
Posted by Samantha at 7:54 PM 13 comments:

Lots of Clothes for Sale!

I am doing a huge purge of my historical wardrobe. I've started listing things on Etsy, and there will be more added in the next few days. Check it out and pass it along! Thanks! 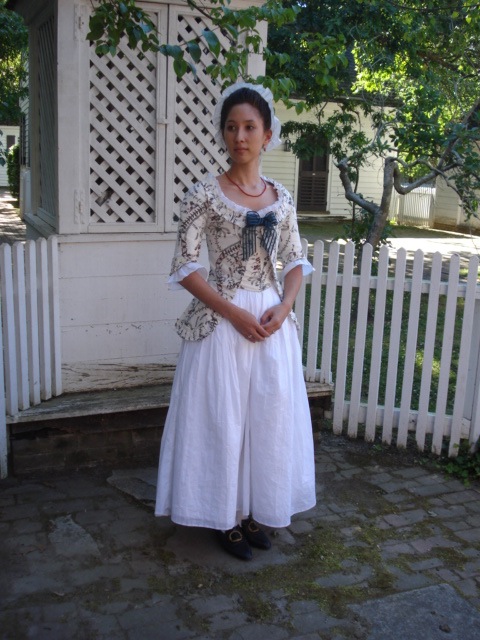 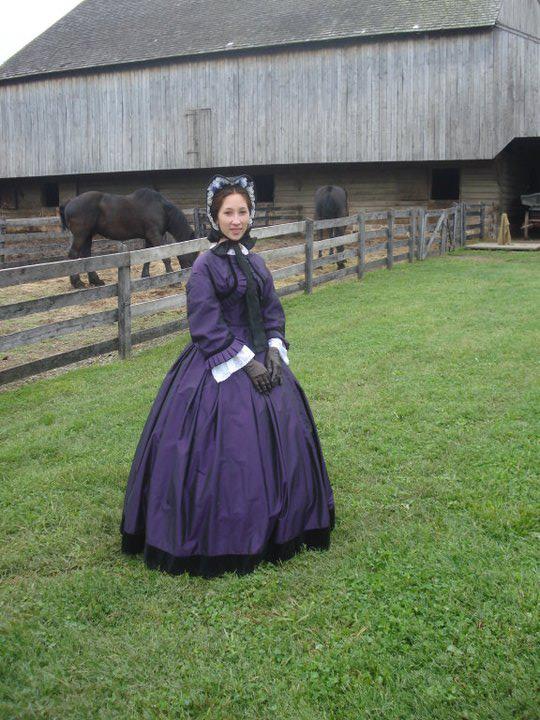 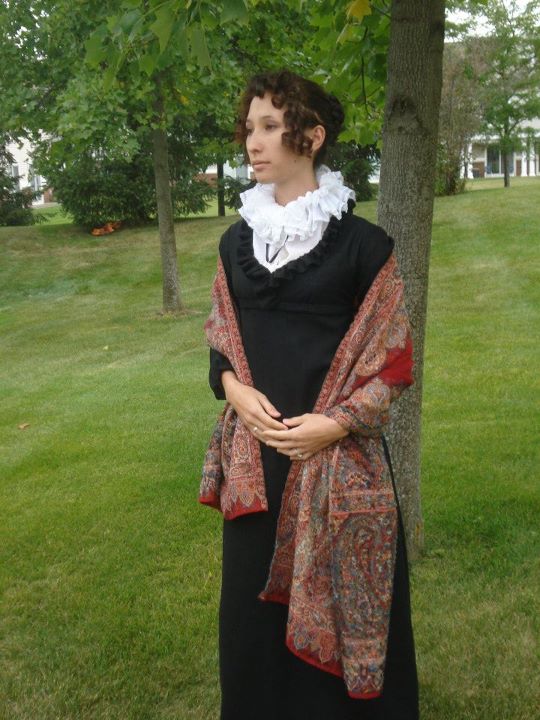 Posted by Samantha at 4:52 PM No comments:

I've had this fabric in my stash for almost 3 years now. But since we never had any real Regency balls to go to, I never got around to making the gown! However, the local Regency ball returned this year to it's original location in Lansing after a stint in South Bend, Indiana.

I of course had a lot more planned for this gown, but it was a rush job so I ran out of time for the finishing touches. Mainly a pointed belt, bands of trim around the skirt, and buttons on the sleeve turn-backs. It doesn't look bad without those things, though (except maybe the buttons) so I wasn't disappointed with the gown. And I hand sewed the entire thing in less than a week... (AND made an Elizabethan headdress by hand in the middle of the week as well, which is another post.)

The fabric is a lightweight silk and metallic brocaded fabric and the sleeves are cotton voile. The turban is a silk/metallic tissue and the gorgeous ostrich plume headband was a gift from Nicole. I felt very elegant with it!

Someday the gown will get its finishing touches... For now, I enjoy its simple elegance.

I call this my "dancing girl from fashion plate" pose. See? 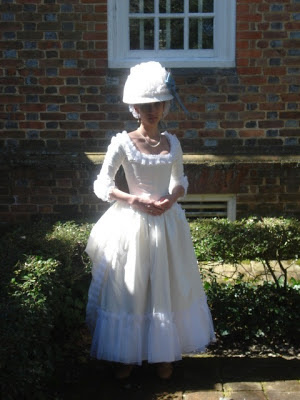 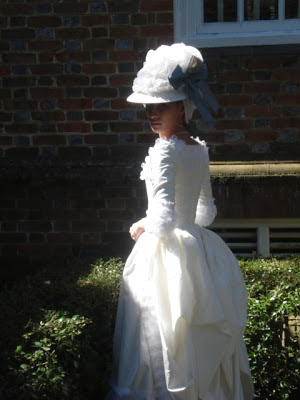 *sigh* I did not get nearly as much done for my Wiliamsburg visit as I had hoped... It was one of those instances where life got too busy, and I didn't feel like stressing myself out with sewing. So I finished the gown. I have one mitt done, no muff, and no mantle like I had planned. BUT I had a beautiful, wonderful, fabulous time visiting my fiance and friends. I wouldn't trade all the 18th century accessories in the world for the fun I had. For one thing, my friends threw me a surprise vintage lingerie bridal shower!

So on to the gown... It is entirely hand sewn using 18th century techniques, even all that gauze trim. Previous summer intern Amber made the hat I'm wearing. I'm excited because I have all the stuff in my stash to make one just like it! It matched my gown perfectly! I also worked on the cap last summer during my internship.