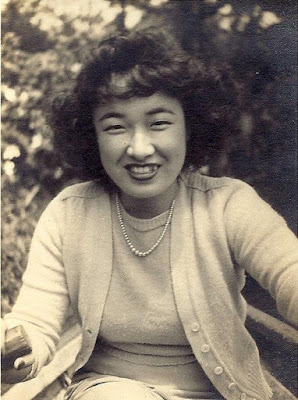 A little while ago there were some powerful stories circulating on Instagram about the experiences of people of color in the costuming community. As a person of mixed race myself, I felt both saddened and strengthened to read about these experiences and know what I wasn't alone. I didn't share my own experiences at the time because it can be painful and emotionally exhausting to do so, and I applaud those who had the strength to share.

Yesterday I posted a video on my Facebook that interviewed mixed-race people to talk about their experiences. In the ongoing discussion about race in America, mixed race people's voices are just beginning to be heard. The people interviewed spoke to the ambiguous place that mixed race people occupy, never feeling fully a part of any culture and continually being "othered" by white people and people of color.

My identity as a person of mixed race is something that I have struggled with my entire life, and I am still on a journey of understanding and acceptance. Even though this blog is almost entirely for sharing my historical clothing research and recreation, there's no denying that my racial identity is a huge part of me as a person, an historian, an artist, and a maker. So read on if you'd like. If you're just here for pretty pictures, I'm hoping to have a new costume post very soon and you can check back later.

My grandmother, Michiko Watanabe, came to America in the 1950s after she married my grandfather, Arthur Stickel, an American sailor from Columbus, Ohio. He was stationed in Japan during the Korean War and my grandmother worked in a cafe in a train station. My grandpa's brother had survived the Bataan Death March, but was killed when the US sank an un-marked Japanese ship carrying POW's. It still amazes me that my grandpa's family embraced my Japanese grandmother the way they did, even though their son/brother had been a prisoner of the Japanese and died in their custody. When my grandma came to America, she stopped speaking Japanese except when talking to her family back in Japan. She learned to cook German-American food. She converted to Catholicism. She loved baseball. She took a job as an alterations seamstress in a department store in Columbus. She became, as much as possible, an American.

My grandpa loved musicals and movies and one of his favorite things was introducing me to his favorites. I'll never forget when he showed me the 1957 movie "Sayonara", about an American Air Force pilot in the Korean War who falls in love with a Japanese woman. He told me, "This is the story of your Oma and me." He also told me that the Navy chaplain who married them warned them to avoid the southern United States, since they would most certainly not be welcomed there as a married couple. 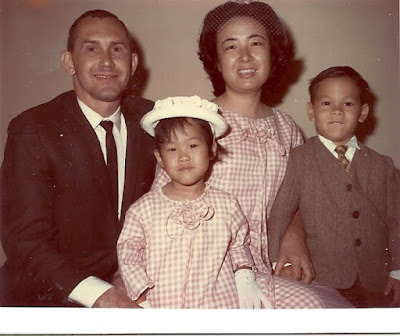 I was told that because of illness, my grandma couldn't have children. My grandparents adopted my mother, born of Chinese-American parents, in Los Angeles, where they relocated. My uncle, of Chinese and French descent, was also adopted. My mom and uncle weren't raised knowing anything about their Chinese culture, nor did my grandma teach them how to speak Japanese or cook them Japanese food. None of that stopped the racist teasing that my mom faced in school, because of course, she still looked Asian. 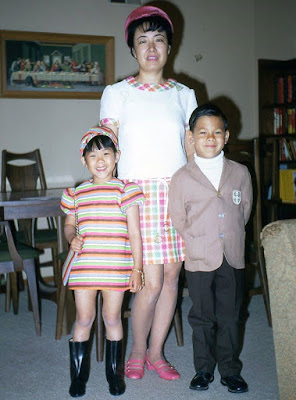 Both my mom and dad worked when I was growing up, but my grandparents lived around the corner from us and they were our after-school carers. I am so grateful to have had the close relationship I had with them. I absolutely took it for granted as a kid, which is one of my biggest regrets in life. I only know as much as I have shared with you thus far about their story, and I know there is so much more. My grandma sewed every Halloween costume, recital costume, and First Communion dress for me and my sister. She taught me the basics of sewing and absolutely laid the foundation for my passion and career. I owe so much to her. Still, I learned almost nothing about her culture. My culture? Even though I'm half-Chinese, I think I identify more with Japanese culture because of my grandmother, who at least was a living link to my "family" in Japan. She did teach me how to count to five in Japanese and say "Moshi moshi" when answering the telephone. But I was still a half-Chinese daughter of a Chinese-American woman adopted by a Japanese immigrant. What did that mean? Who was I? 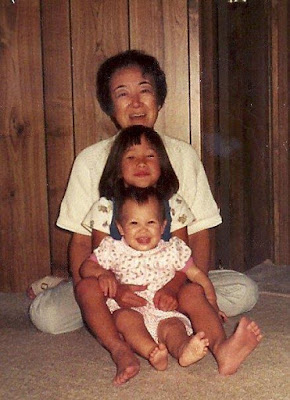 I distinctly remember being ashamed of my tan skin and squinty eyes as a kid. I resented blonde characters on TV and in movies and always rooted for the brunette in a show because they were more like me even though they were white. I was in grade school when I experienced deep anxiety about my skin color, because of an off-hand comment that a friend said to me about it. My paternal grandmother tried to comfort me by telling me about her attempts to get a tan artificially and just turning orange. It still didn't help. My family often visited Hawaii when I was growing up, and while I felt most "normal" among the majority non-white population there, I still covered my skin in hats and rash guards at the beach because I didn't want to get any "darker" than I already was. I wanted to be white. And I'm going to be completely honest here--there are still times where I wish I was, especially when it comes to living history and historical clothing. I'm always surprised when people assume I'm white, especially in historical clothing, but deep down inside a tiny part of me is relieved. 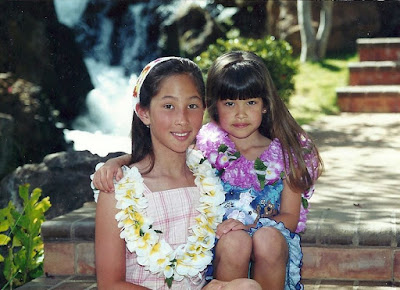 My love of history and historical clothing has always been with me, even when I was little. I loved the period pieces my grandpa showed me, such as "The King and I." But I wanted to be Anna, not Lady Thiang or Tuptim. As I learned more about historical clothing and began to make things for myself and go to events, the micro-aggressions began trickling in. A reenacting friend asked me if I had ever considered portraying a Chinese woman during the Civil War (there were incredibly few, if any, Chinese women in America during the Civil War, by the way. And I shouldn't have to justify my existence to take part in a hobby). When I joined the Queen's Court at the Renaissance Faire, another courtier bemoaned "They're (the Asians) taking over!" (I was one of three Asians in the cast at the time). I could list a dozen other examples, but that's not really the point. And also, it's painful to relive them. 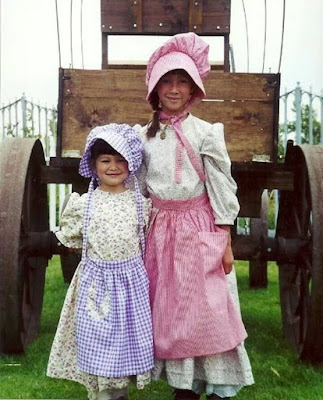 These instances related to historical clothing and living history are only a small part of the "regular" microaggressions that mixed-race people encounter on a daily basis. I have come to understand that most of the microaggressive comments and questions white people say to mixed-race people come from a place of curiosity or admiration (not quite the word I'm looking for but I can't come up with anything better) and not from malice. Undoubtedly the most common one is "What are you?". And you know what really hurts about this question? Think about the last time you saw a really cool looking dog out for a walk. You ask the owner if you can give the good boy or girl some pats. And then you ask "What kind of dog is it?" Well, asking "What are you?" feels like you're asking me what kind of dog am I. That I'm a mutt, a mongrel, and you want to know what purebred dogs make up this unique mix. It's not a compliment. It's not a conversation starter. You've made me feel like an animal. This analogy also works for another common comment I've received, that mixed-race people have better genes than.... purebred (?) people. My own health issues aside, it's also not a compliment. Neither is it comforting to be told that since so many Americans have multiple European nationalities in their heritage, that it's somehow the same as having mixed non-white ethnic heritage and "we're all one big melting pot!" It completely ignores the often painful experiences of mixed-race people and the centuries of racism that have shaped this country.

Perhaps what is most frustrating for me is the notion that the "gift" of being "exotic" or having a "unique" look that comes from being mixed-race somehow erases or makes up for the pain and confusion that also come from being mixed-race. It all comes down to what has been termed "othering", that is, making a person or group of people feel like they don't belong, that they're alien, that they're "not one of us." I'm here to tell you that whether you're a little kid or a grown adult, being "othered" hurts, especially when you already have no idea where you belong.

I know my friends and family love me regardless of my racial background. I know that my skills have value regardless of my racial background. But I still have to endure the microaggressions, stereotypes, and flat-out racism that come with my Asian-ness. And what's more, I don't have any connection to my Asian culture (again, would that be Chinese or Japanese?) in which to find comfort or identity. It's not uncommon for mixed-race people, even those who aren't partially white and instead are from different non-white cultures, to feel like they aren't fully accepted into the cultures that make them up. White people will never see me as white (and they shouldn't--I'm not white) but I'm not culturally Asian either, so how can I identify as Asian?

There is so much more I could say about this, but I've already said a lot. If you've made it this far, thank you for taking the time to read this. I'm not looking for compliments or to be told race and ethnicity shouldn't or don't matter and I should just love myself for who I am. The reality is that in our society today, those things do matter and they do affect our identity. My sincerest hope is that you, dear reader, will have learned something and will in the future stop to consider your words before you say or write them. Just because I've experienced hurtful and thoughtless words doesn't mean I am perfect and always say the right thing, because I don't and I'm human just like everyone else. What we need more than ever right now is to listen to each other, to affirm that what that person is feeling is valid, and to promise and endeavor to be better in the future. 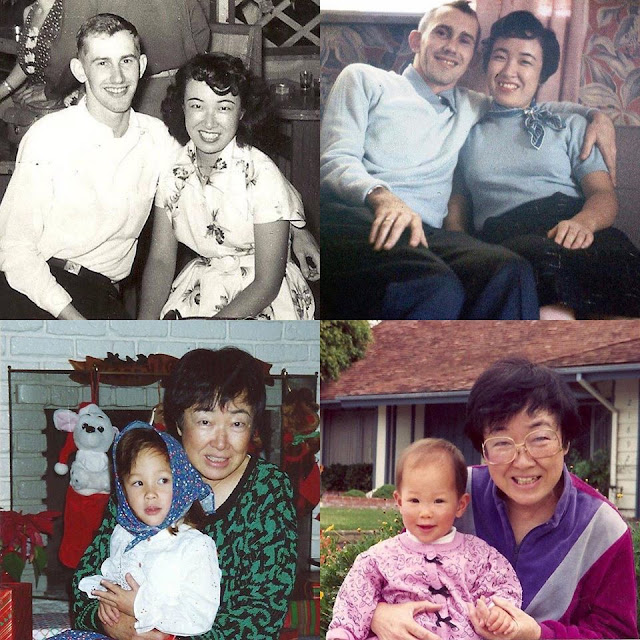