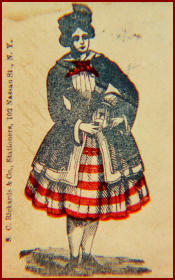 These are all names for women who served in a similar capacity during the Civil War, and prior, particularly in the Crimean War. As the name suggests, vivandieres were originally associated with French regiments. They acted as nurses and cheerleaders, carrying kegs of brandy or wine with them to nurse wounded troops on the battlefield. "The dashing image of French soldiers, especially the Zouave regiments, in the Crimean War, captured the imagination of Americans in the 1850s, and, by 1859, several local militia regiments had adopted the name "Zouave," as well as interpretations of the colorful Zouave uniforms. Some of these local groups sported a vivandiere in their ranks. At the outbreak of the American Civil War, most regiments were organized as independent companies of troops, raised in a local area. Some of these companies selected their own uniforms and accoutrements without regard to regular army practice. And some of these regiments also selected a local lady to serve as "the daughter of the regiment," the American equivalent to the French vivandiere."** They modeled their "uniforms" after those of the regiment they served, but there was no set or official uniform and thus much variation occurs. Civil War vivandieres were most common during the first two years of the war, although a few remained until the end. Since vivandieres were not sanctioned by the army, there is no official record of the number of women who served. The written records we do have come from newspapers and letters.

This is a list of known women who served with Confederate units. I do not remember the website I got this chart from, but if you do, please let me know and I will properly acknowledge the source! 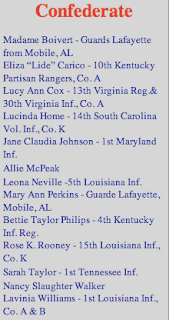 What follows is the research I have done on 1860s vivandieres (heretofore referred to as "vivs") and the reasons for the design choices that I am making with my Confederate "uniform". Later on, when I create a Union (Michigan) "uniform", I'll do a separate post about that.

The Bodice:
Most people think of Zouave vivs when imagining vivandieres: unfitted jacket and unfitted blouse. This was styled after the jackets and shirts worn by the Zouave soldiers. But this was certainly not the only style being worn by vivs, and not all vivs were with Zouave units.

I am taking the majority of my bodice inspiration from a lone surviving viv outfit held by the Smithsonian. It features a fitted bodice with pretty gold buttons and a lace collar. I have 6 CSA buttons to put on my bodice, snagged from my friend when he was switching them out to VA buttons. 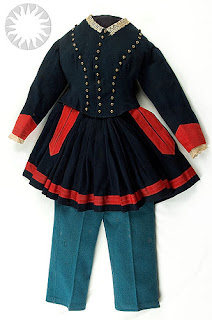 Here are a couple more images of fitted bodices (note: some women may simply be wearing military-style dress as a way to show their support; discretion is advised when interpreting photos): 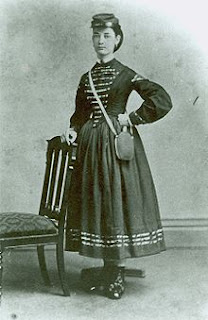 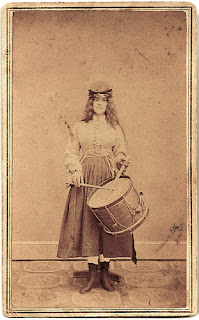 Eliza Wilson of the 5th WI wore "her dark brown frock buttoned tightly around her waist, her what-you-call-ems [Turkish trousers] tucked into her well fitting gaiters."**
Skirt Length:
This varies hugely between each lady. Some reach mid calf, some are above the knee. I'm choosing at the knee out of personal preference. 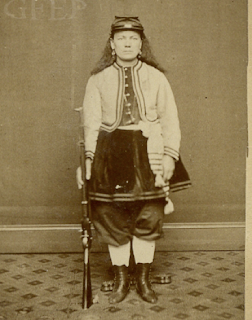 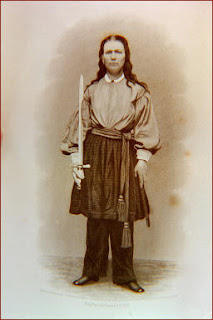 Trousers:
These also varied widely. Some women wore straight legged trousers, similar to what men wore. Others wore "Turkish trousers" which were full and gathered at the ankle, or below the knee. For now, I will be wearing hand-me-down grey wool trousers from my brother, but I intend to make my own when time allows, most likely in the straight legged style.
Hats and Hair:
Many women are depicted wearing kepis, although "pork pie" and a wide brimmed style were also seen. I will be wearing a kepi made by the talented Tyler Putman (haversack also made by him). Women are also seen with their hair worn down. I have been told that this was so they wouldn't be mistaken for men on the battlefield. I have yet to find evidence to support this, but it sounds logical (although not terribly practical since your hair would be getting in the way; at least mine would be!). I think I'll be wearing my hair down at first to see how I like it. 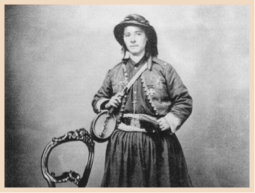 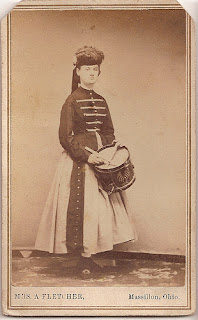 Accessories:
My prized accessory for this impression is my vintage wooden keg. This was an iconic symbol of the classic vivandiere. I will be attaching straps to it, although I do not intend to put liquid in it to drink from because I'm not sure if the keg is food safe... I will also carry a knife, and haversack filled with ripped and rolled bandages. 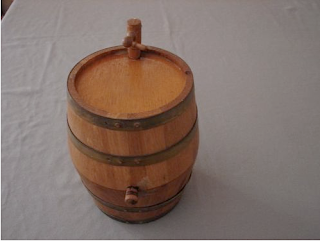 I have cut and assembled the skirt tonight. Bodice will be done tomorrow. Pictures soon!
**from "The Daughter of the Regiment: A Brief History of Vivandieres and Cantinieres in the American Civil War" by Susan Lyons Hughes
Posted by Samantha at 12:59 AM

Are we baptising your vivandierre impression at El Dorado as planned, or earlier? ;-)

I didn't know anything about vivandierres. I find this bit of history completely awesome! I think the outfit is really cute also. Thanks for sharing.

Look forward to seeing your outfit! I didn't make the haversack, though, sadly. Interestingly, the French copied the zouave style from the Algerians originally. That's why it sometimes has a North African-type look (fez, bloused pants, etc.). The Michigan woman you want to research (as you probably know) is Anna Etheridge.

Good luck on your Vivandiere Project. I have read and researched Cantinieres and Vivandieres for some time and occasionally blog about them. While not all vivandieres were "beautiful" as we know from the photographs, their outfits were feminine and not a "tom boy" outfit as practiced by some reenactors. Beware that numberous vivandiere outfits are post war as in Kady Brownell's costume with the rifle that you posted above. That is part of a series taken in 1870 as part of her Grand Army Of The Republic drill show in Connecticut. Others are from theatrical productions of The Daughter of the Regiment etc.

My blob is "I like the Things I like" and covers toy soldiers vivandiers, military history, women's clothing from the 1800 and early 1900s, and a little politics.

I was just wondering if you could tell me where you got your keg? Thanks.