It's done! I'm so tickled with this outfit. It's incredibly girly and colorful and frilly and unlike anything I have in any of my historical wardrobes!

Here's to hoping the next two days go by very, very fast! If any of my dear readers are going to UTR as well, please say hello and introduce yourself. I will be with the 33rd Regiment of Foot. :) 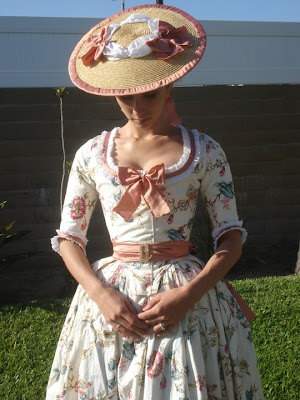 Hawaii in the Mid-19th Century

Hawaii has, and always will have, a special place in my heart. It might seem strange to someone who loves history and is excited about moving from California to Michigan because there will be more, older history. But despite its reputation as a tropical paradise, Hawaii has a fascinating and heartbreaking history of its own.
My own personal history involves 13 straight years of visiting the islands. This year, I get a special opportunity to walk in Waikiki's Independence Day parade... with Civil War reenactors! Yep, that's right, there's Civil War reenactors in Hawaii! Who knew?!
This means that I will be bringing an 1860s outfit with me and wearing it in the parade. Which begs the question, what will I wear?
Even though I didn't get around to posting pictures of it, I did indeed make and wear my teen style sheer dress for Greenfield Village. However, in light of my engagement, I feel much too old for it now! So I've been perusing images for inspiration on how to remake the dress (I have lots of left over fabric for this express purpose). I had originally thought I would just make undersleeves to baste in, but I no longer want the open neckline.
Then a thought struck me-- why not look at images from Hawaii in the 1860s? Because believe it or not, they didn't go around wearing grass skirts and mu'u mu'us all the time. After the missionaries started coming in the 1820s, many Hawaiians adopted western clothing. The kings, queens, princes, and princesses of Hawaii were arrayed just as beautifully as their European counterparts.
What follows are some really beautiful images of Hawaiian royals in the 1860s (and earlier), including the picture I've settled on for re-doing my teen sheer. Enjoy!

Sneak Peak at the Pink

This is one of two linen gowns that I whipped up for Under the Redcoat (the other one you can see at my Livejournal!). Since my wardrobe up to now consisted of all wool gowns and jackets, I wanted some lighter-weight items in my arsenal. ;-)

Nothing fancy, since this is meant to be worked it. I will be hauling water, splitting wood, and helping Mistresses Sarah and Emily in the officers' kitchen. No frills here!

In regards to my previous entry, I listened to the voice of reason (aka my fiance) and decided to just fix my current stays. The nice things is, it worked! No more muffin top or side bosom. He also convinced me to set aside the silk gown for a little longer and instead dress up the chintz gown I made last year. After I tried it on, and remembered how much I really do like it, I was convinced. I only wore it for one day at Costume College. I plan on retrimming it with silk organdy and silk ribbon, like this painted silk gown from KCI. 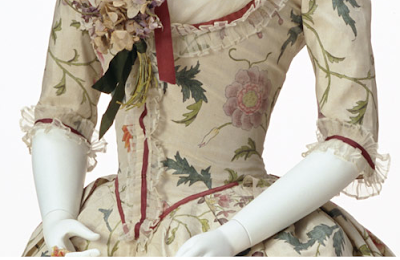 We are now at 13 days out until I am in Williamsburg for Under the Redcoat. I finished one of two linen gowns (since my 18th c wardrobe consists entirely of wool gowns and jackets!) and have the second cut out and 50% sewn together. I had planned to make up a striped silk gown to wear to dinner Friday and a concert Sunday, but it's becoming more and more apparent to me that I need new stays.

Things preventing me from having new stays are:
The smart move would be to just fix my current stays by adding shoulder straps, thus eliminating the side-bosom that is bothering me. But my issues with my stays go beyond that: I want to achieve a different silhouette. And that can only be done with new stays. I feel like I have to choose between new stays or a new gown, or ditch both and fix my old stays and wear a chintz gown that I made last year and wore once.

To some, with stronger constitutions and sounder logic, the choice would seem apparent. But I am fretting over this considerably.
Posted by Samantha at 11:07 AM 2 comments: 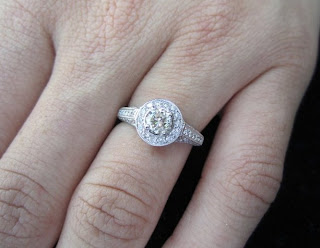 My friends and I attended Greenfield Village's Civil War event this past weekend. It's certainly one of my favorite events because of the charming venue, high number of attendees, and beautiful ball. Well... this event was made even more special because my boyfriend proposed to me at the ball! I couldn't have asked for a sweeter, more perfect proposal.
...and I said yes!
Here's some pictures from the ball. We also have engagement photos coming soon! 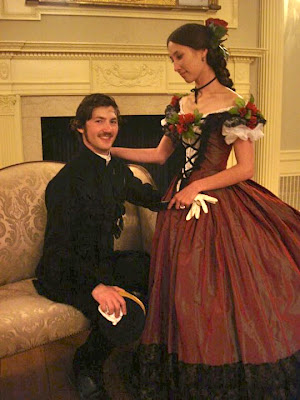 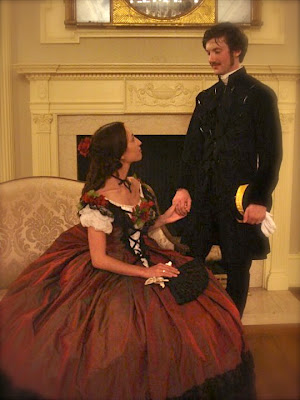 I know I have a lot of catching up to do; I was too busy during my week in Michigan to be online very much!