This sumptuous coat is in excellent condition apart from some faint stains on lining, which are completely invisible when worn (see pictures). Fur is pristine, all closures are sound. It has pockets! Would fit S-M.
$250 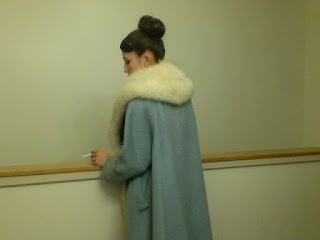 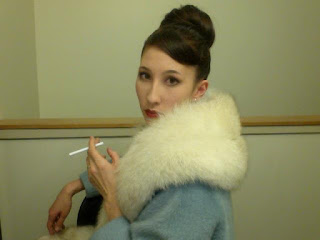 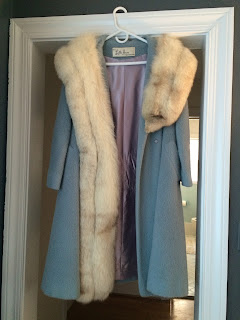 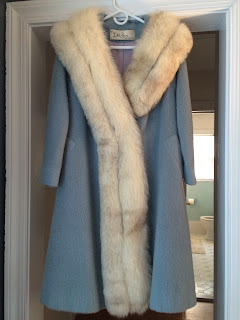 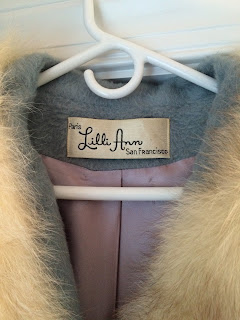 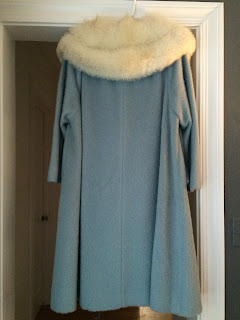 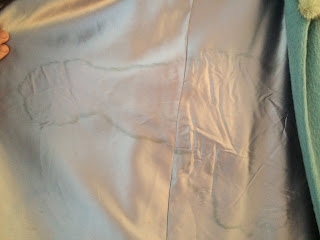 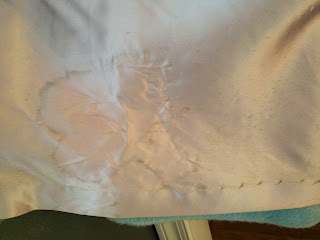 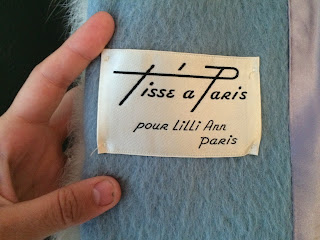 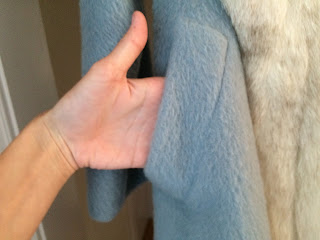 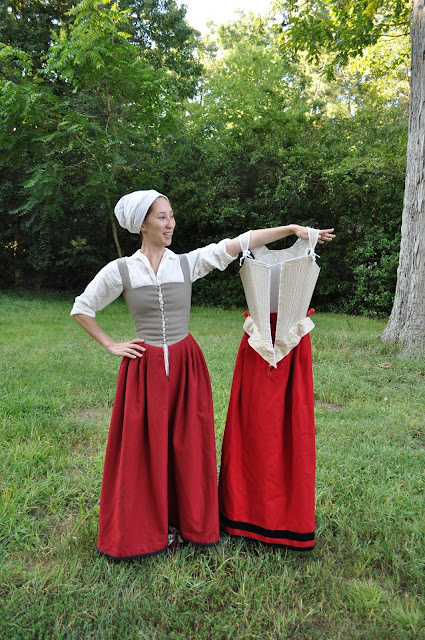 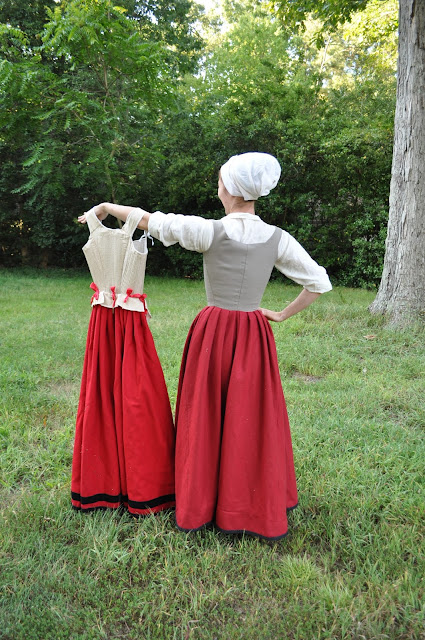 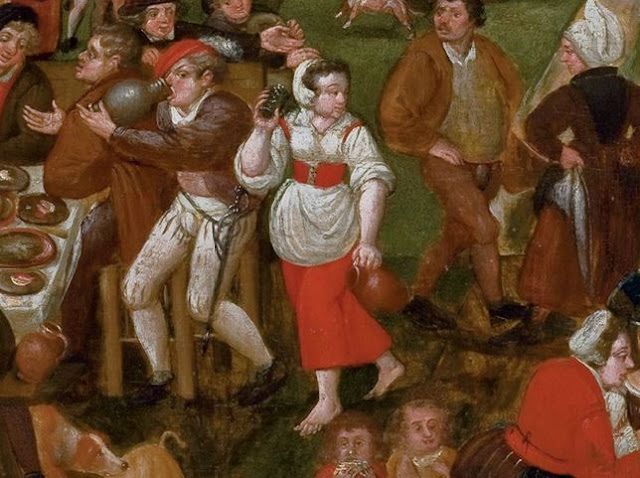 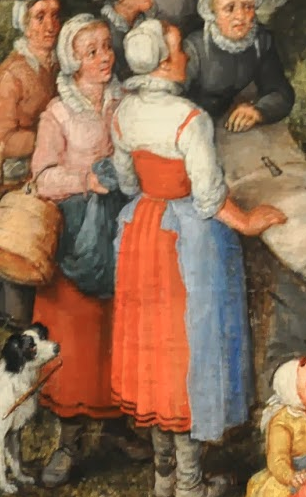 Probably a waistcoat worn over a petticoat. 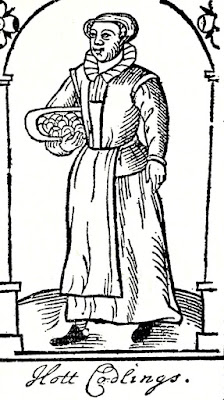 Although the garment has been finished for over a week, I've been putting off writing this post because there is SO much to say! Support garments in the 16th (and early 17th; to the 1620s for my purposes) century are a very complex, tricky subject. Part of the problem is that there are so few extant garments, compared to the 18th century for example, to work from. Elizabethans also weren't always clear in some of their terminology, much to the frustration of clothing historians!
One thing that is clear--or I should say, has become clear in the past few years--is that most women in the Elizabethan period probably did not wear a separate boned garment under their gowns, at least until the very end of the century (and then by mainly fashionable women--well get into that later!). I know, I know. If you made an outfit for a Renaissance faire in the past 20... 30 years, you probably made a boned corset for your outfit. I did! But current research now suggests that this probably was not the most likely garment for women to be wearing in this period. It's probably more common for a woman to wear a petticoat and/or kirtle consisting of a bodice attached to a skirt (we'll get into petticoat vs. kirtle later as well!). The bodice--often called "upperbodies" or "bodies" in period document--most likely did not rely on boning for support and shape in the way that boning is used later in the 17th century and on into the 18th and 19th centuries. Instead, layers of padstitched canvas and buckram and a proper fit could provide support for the female figure. It's certainly possible that other forms of stiffening were being used, perhaps bents (dried sea grass), pasteboard, or cording, since we see them in other applications like whalebone and bents in the large "farthingale" sleeves of the 1590s.
Today we associate "petticoat" with just a skirt, but for Elizabethan women it most likely had an attached bodice. In the written record, authors specifically mention when petticoats are "without bodies" instead of the other way around. Even though the bodies and skirt were attached, wardrobe accounts and tailors bills often talk about making the pieces separately, or enlarging or making new bodies as a woman's body changed. Bodies and skirt did not have to be of the same fabric. For example, clothing was provided for the poor of Ipswich, and this entry mentions canvas for the bodies of petticoats:
"More, payde for ii yardes iii qtrs. of canves for iii upper bodies for iii of the grete wenches' petticottes and for the strengthening of ther wastcottes, at xd. per yarde iis iiid"

The woman in the middle of the painting with her back to us wear a petticoat with a brown bodice and red skirt. Red was an extremely common color for petticoats (but that's a discussion for another day!).
Kirtles could also feature expensive fabric for the parts that would show and cheaper fabric for those that would not.  Now let's discuss petticoat vs. kirtle. They both seem to consist of a bodice and skirt. The bodices may or may not have been the support layer. I mean to say that if you had a supportive petticoat, your kirtle didn't need to be supportive as well--or vice versa. If your kirtle bodies are supportive, your petticoat doesn't need a supportive bodice. The Tudor Tailor by Jane Malcolm-Davies and Ninya Mikhaila puts the issue of petticoat vs. kirtle better than I ever could, so I will quote from them directly:


"A woman's outer clothes consisted of various combinations of petticoat, kirtle, gown, and jacket. Which of these she wore, and how many of them at one time, depended on her rank, the weather, the occasion, and the gradual evolution of fahsion through the century." (Mikhaila and Malcom-Davies, pg. 20)

"The garment worn by all women over the smock consisted of a fitted bodice with attached skirt. In the early Tudor period, this was called a kirtle. By the 1550s, the word 'petticoat' was being used to describe this item of clohthing and 'kirtle' referred to a garment that was worn over, or instead of, a petticoat by wealthier, more fashionable women."(Mikhaila and Malcolm-Davies, pg 64)
The last page of Kimiko's article quotes an online discussion with Ninya Mikhaila further elaborating the evolution of petticoat and kirtle terminology.

So what about the Elizabeth I "effigy" bodies, or the Pzalgrafin bodies in Patterns of Fashion? Yes, boned support garments did exist. But you'll notice that both of those garments come from the very end of the 16th century and beginning of the 17th century, and they belonged to royal women. The Tudor Tailor notes that in their survey of Essex wills, only four pairs of bodies are mentioned in the last quarter of the 16th century, almost all of them belonging to women of the upper classes (Mikhaila and Malcolm-Davies, pg. 23). At that time period, boned bodies are becoming fashionable among the elite and working their way down through society. Those bodies could be tied or "pointed" to a skirt-only petticoat (also becoming more fashionable in this period).  If you zoom in on the portrait of Elizabeth Vernon en dishabille, you'll be able to make out the pretty matching pink points tying her bodies to her gorgeous petticoat. It's a bit tricky because she has a sheer apron tied around her waist, but they're there! I did this on my silk bodies and scarlet broadcloth petticoat, which will be the foundation garments for the silk 1610s gown I have fabric for... 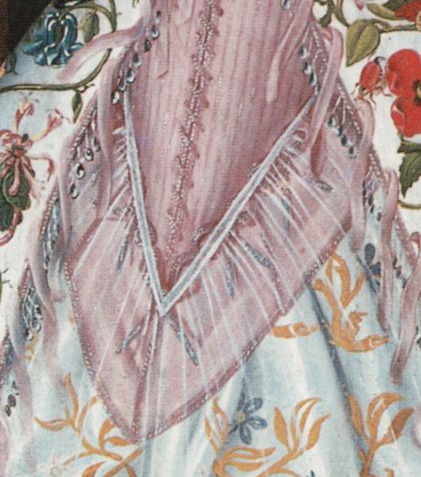 There are paintings of women in the early 17th century, just about all Flemish, working in kitchens with bodies that clearly have stitching lines to possibly hold some kind of boning. It's been pointed out in discussions in the Elizabethan Costuming group on Facebook (a really excellent community, by the way! Lots of very knowledgeable and kind folks) that these are often allegorical paintings. And many of the women are also wearing pretty fashionable neckwear which doesn't seem terribly practical for doing kitchen work! I do want to acknowledge those images, although I don't feel they are the norm for common women of the period. That is of course not to say that lower and middle class women couldn't have had such a garment, but it seems less likely than their having a petticoat or kirtle.

Other lovely folks have written some great stuff on this subject, so I will post links to their work at this time:
http://www.elizabethancostume.net/petticoat.html
https://www.facebook.com/media/set/?set=a.953475971345501.1073741850.697208360305598&type=3
If you want more primary accounts describing petticoats, search "petticoat bodies" in the killer Elizabethan wardrobe account database!
And please check out the amazing people at The Tudor Tailor for books, patterns, supplies, information, and inspiration!

Petticoats didn't disappear with the new century, though. They were definitely worn into the first few decades 17th century by common women. The women who came to Jamestown in Virginia in 1621 were provided some clothing by the Virginia Company, including one petticoat, one waistcoat, and two smocks. There is no mention of a separate pair of bodies, though, so it's my belief that they were given typical petticoats with attached supportive upperbodies.
So of course I had to have one! This will serve as my supportive layer for my forthcoming 1560s ensemble, and for a set of common woman's clothing for my interpretive work at early 17th century Virignia sites like Henricus and Jamestown. I have a 17th century event coming up next month, and I hope to have a low-neck smock, partlet, and waistcoat finished for that! Easy, right? ;-)
My petticoat is made of wool and has two layers of heavyweight, coarse linen padstitched together for the bodies, then lined in linen--no boning! Skirt was squeezed out of two yards of red wool flannel (yay piecing!) and bound in black wool tape. 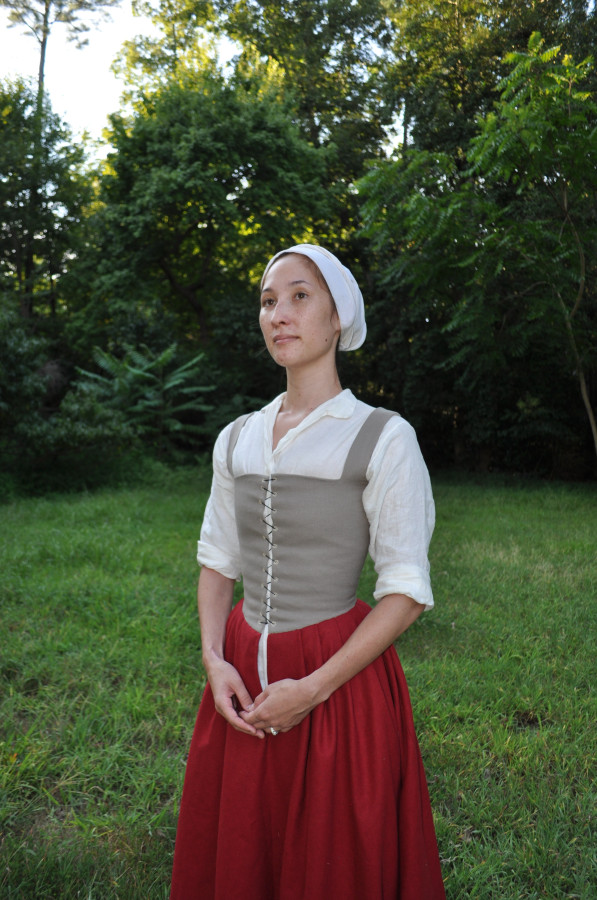 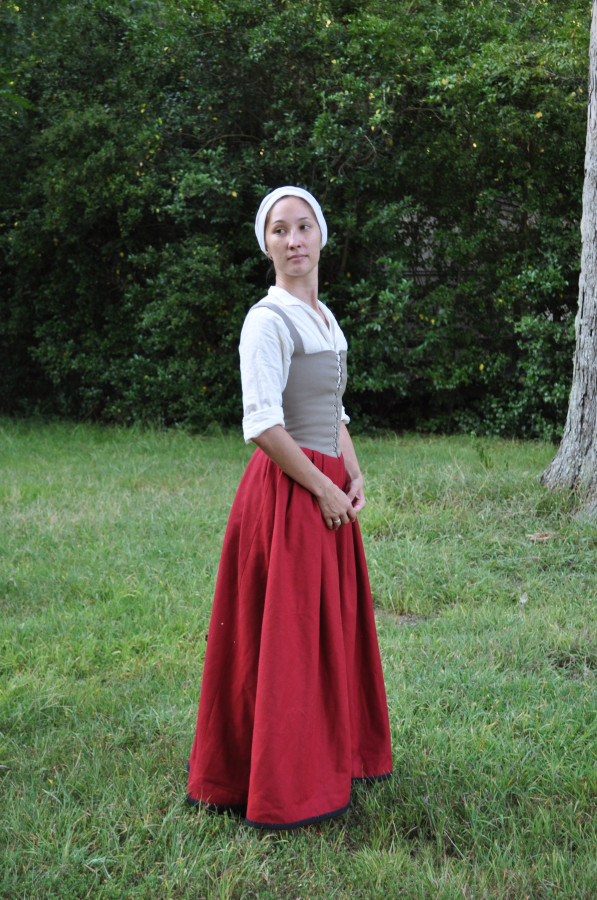 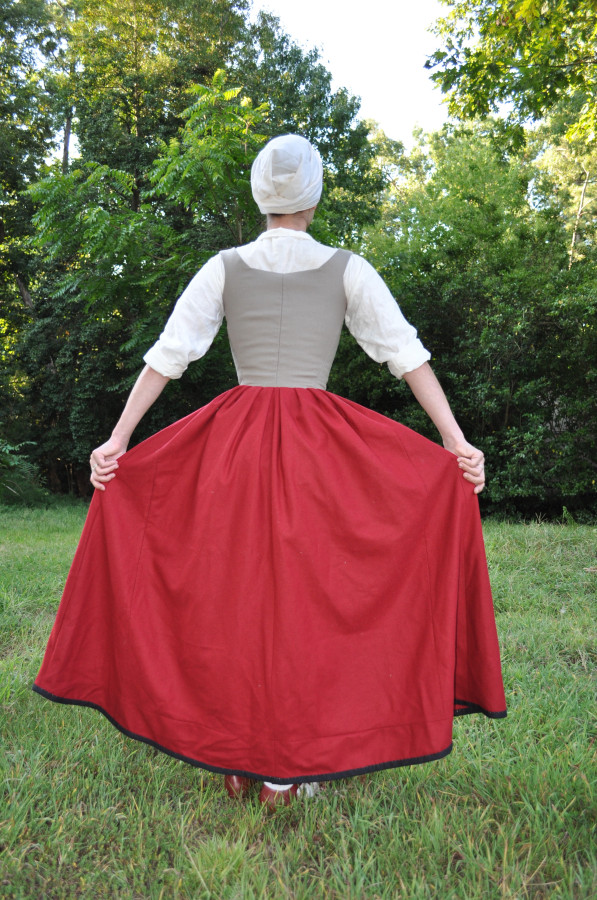 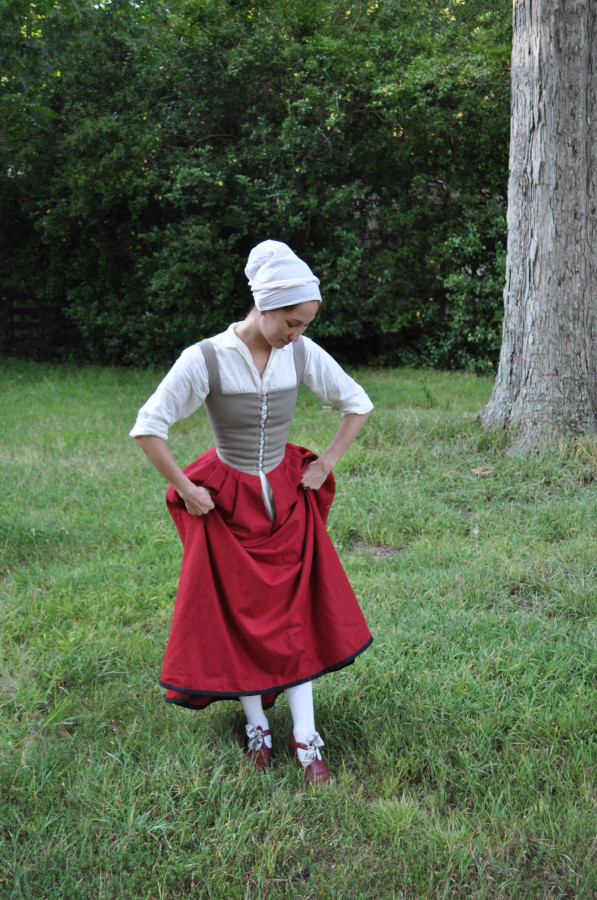 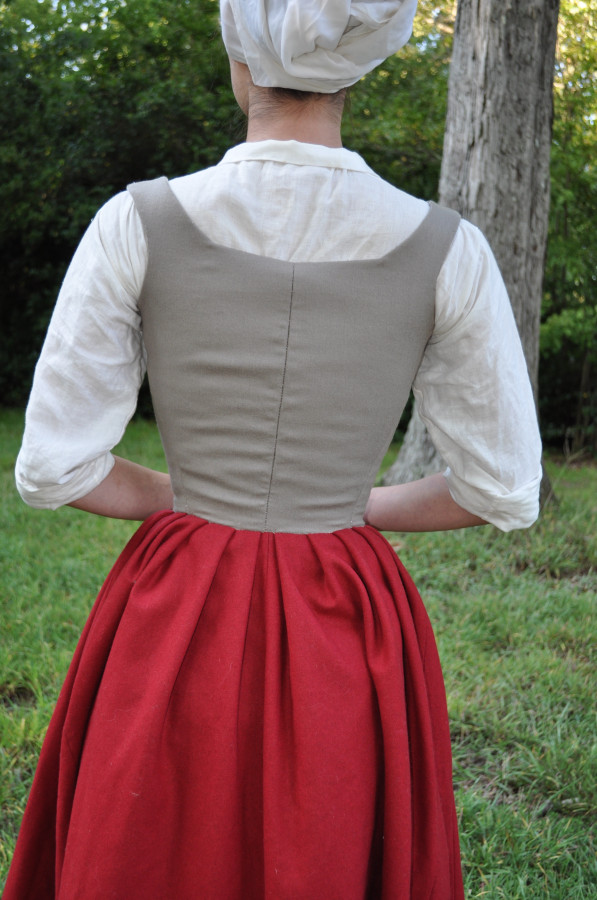 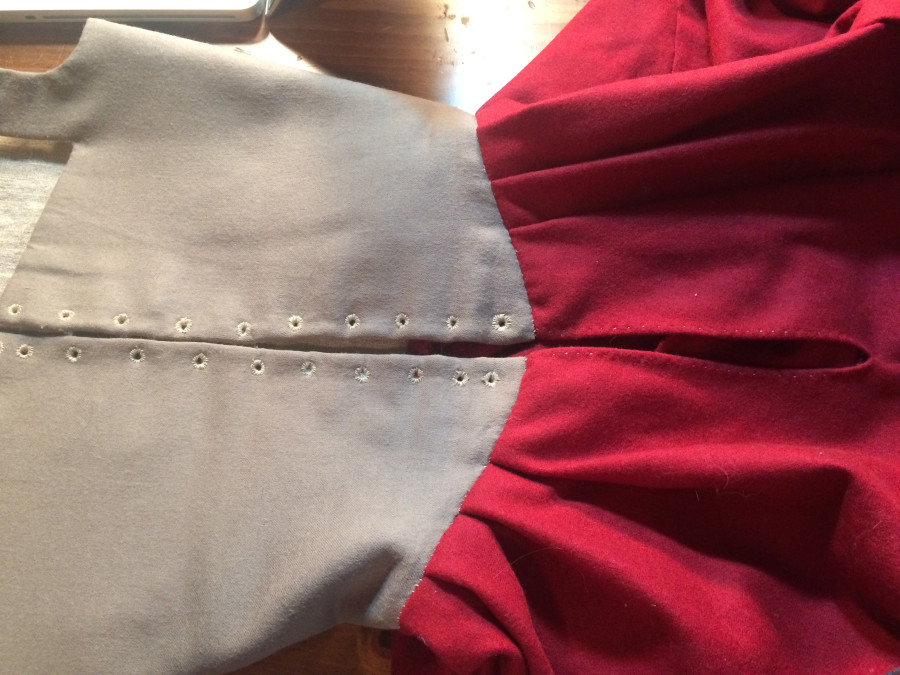 The skirt top edge is folded over and whipped to the bottom edge of the bodies, which have been completely finished by stitching the lining in. 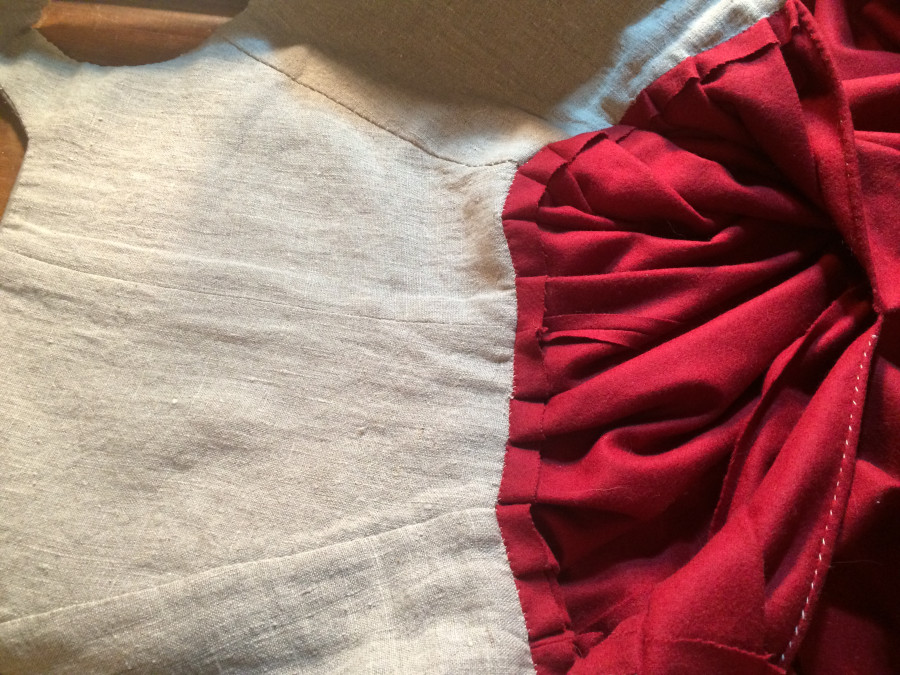 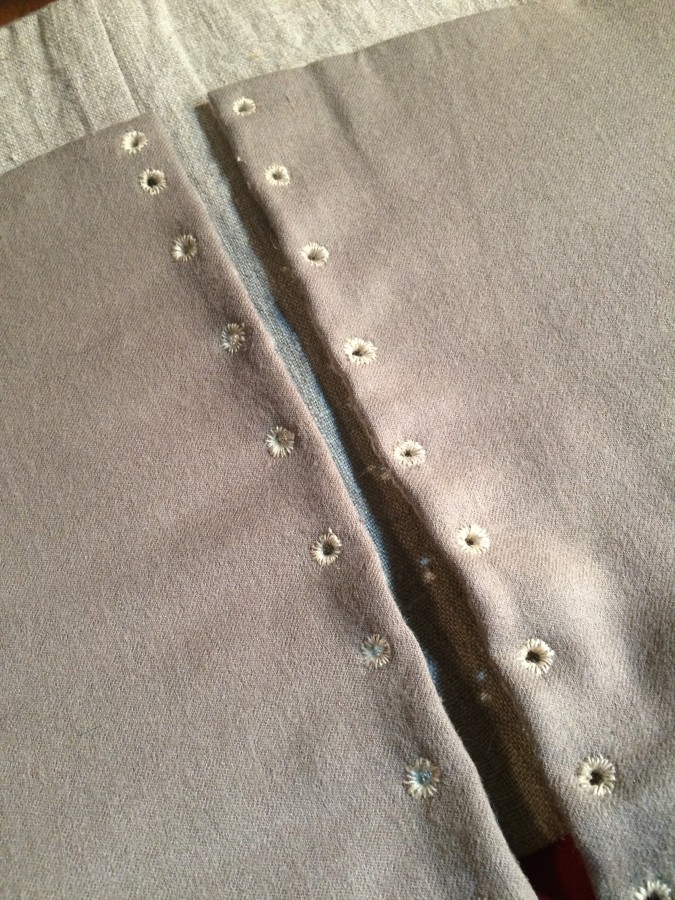 A bit of the piecing, and the wool tape binding. I purposefully chose to do all of the stitching in unbleached linen thread. 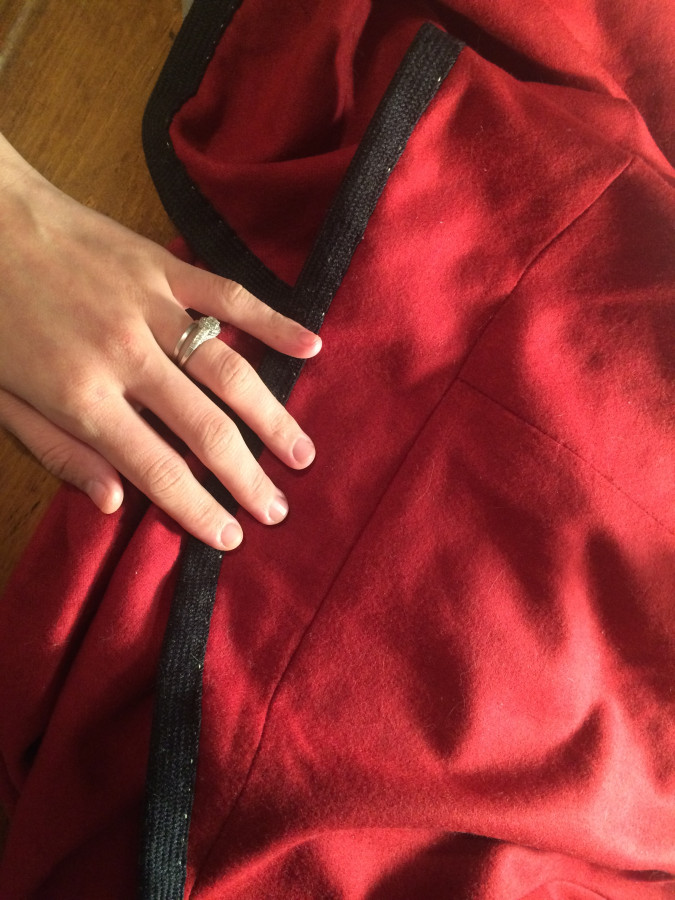 A shot of the "guts". The seam allowance is stitched down with a herringbone stitch. I only did padstitching on the fronts, and then only on half of each side. I could have done more, but... meh! 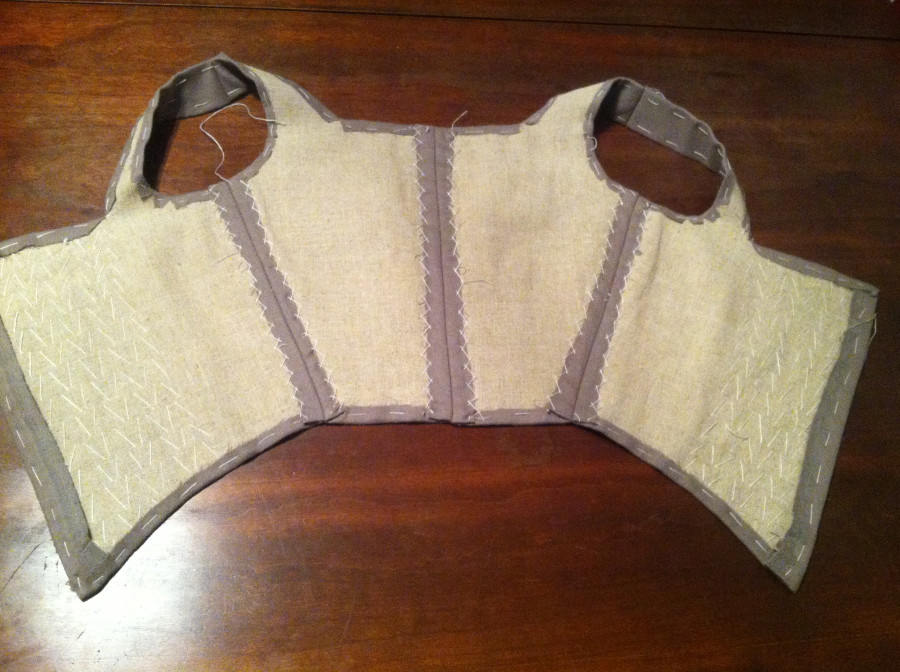 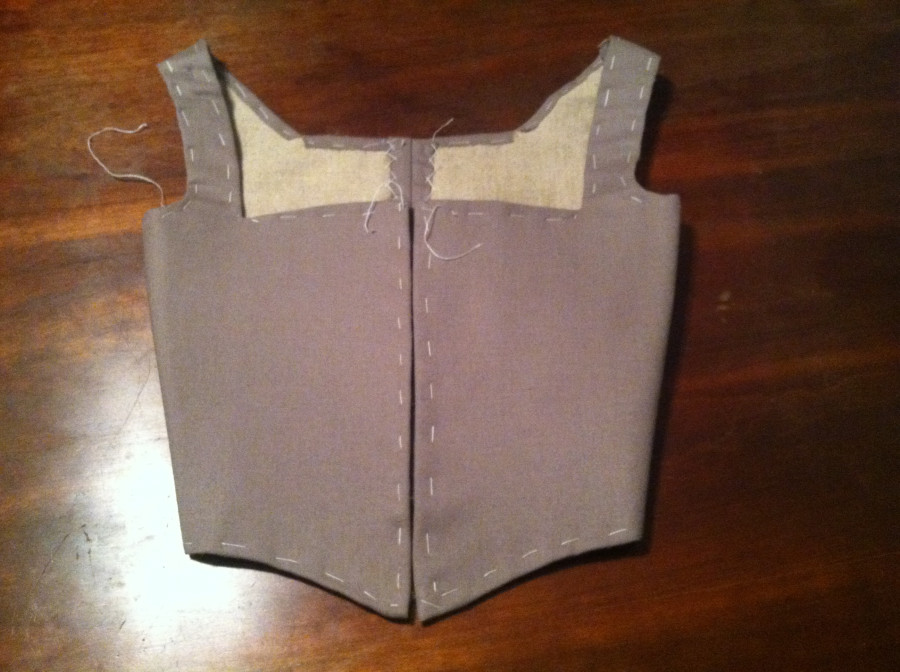